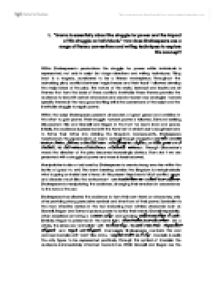 King Lear. Within the script Shakespeare presents characters of great greed and ambition in the effort to gain power. Their struggle towards power is followed,

Within Shakespeare’s productions the struggle for power within individuals is represented; not only in script but stage directions and writing techniques. ‘King Lear’ is a tragedy, considered to be a literary masterpiece. Throughout the coinciding plots, conflicts between tragic heroes and their ‘loyal’ followers develop the major ideas of the play. The nature of the world, betrayal and loyalty are all themes that form the basis of these conflicts. Inevitably these themes provoke the audience to side with certain characters and create modern day analogies towards specific themes in the text; good battling evil is the cornerstone of the script and the inevitable struggle to regain power.

Within the script Shakespeare presents characters of great greed and ambition in the effort to gain power. Their struggle towards power is followed, Edmund seeking Gloucester’s title and Gonerill and Regan in the hunt for Lear’s land and power. Initially, the audience is presented with the ‘love test’ in which Lear’s daughters have to flatter their father into dividing the Kingdom. Consequently, Shakespeare foreshadows the repercussions of Lear’s actions through metaphor ‘We have seen the best of our time...all ruinous disorders follow us disquietly to our graves...we make guilty of our disasters... by and influenced obedience of planetary influence’. Through Gloucester’s words the direction of the play becomes increasingly obvious. From Act I we are presented with a struggle of power and more is foreshadowed.

Manipulation is also a tool used by Shakespeare to create strong emotion within the battle of good vs. evil. The storm brewing outside the Kingdom is metaphorically what is going on inside Lear’s head. At this present time Lear is full of conflict, anger and disorder much like the environment ‘one minded like the weather, most unquietly’. Shakespeare is manipulating the audience, changing their emotions in accordance to the tone of the act.

Shakespeare has allowed the audience to form their own views on characters, only after providing strong persuasive symbols and intentions of their power. Symbolism is the most effective device in the text indicating how ruthless characters such as Gonerill, Regan and Edmund pursue power to satisfy their needs. Gonerill especially, when described as having a ‘wolfish visage’ and as being ‘Sharp-toothed, like a vulture’. Similarly, Regan is presented in the same light; ‘looked black...most serpent like’. On a whole, the sisters are ‘animalistic’ with ‘boarish fangs’, ‘monsters of the deep’, ‘dog hearted daughters’ and ‘tigers not daughters’. Conversely Shakespeare contrasts this and conveys Cordelia with ‘saint’ like status, ‘sing like birds in a cage’. Cordelia is really the only figure to be represented positively. Through this symbol of Cordelia the audience is immediately attracted towards her. Whilst Gonerill and Regan are the epitome of evil, Cordelia by the end of the play is recognised to be the true essence of goodness. Shakespeare also provides animalistic symbolism, through Lear, whilst describing mankind. ‘poor bare forked animal’ describing man’s venerability. It also ironic in the sense, that as Lear gains a sense of being he is able to generalise mankind through the power he once had.

Although Gloucester is physically blinded, Lear is personified metaphorically through his inability to see the world clearly, ‘see better, Lear’. When the sub plots finally meet, Lear’s encounter with Gloucester is beneficial as things become visible.  With careful perception, it becomes increasingly obvious that Gloucester’s blinding is the physical manifestation of the mental torture Lear endures. Shakespeare includes irony after Gloucester’s physical blinding, ‘I stumbled when I saw’. He finally acknowledges his mistakes and misjudgements about his sons. In another case this may be humorous to the audience but in fact it delivers comedy of the grotesque. The audience is deeply saddened through the irony. When Gloucester could see, he couldn’t see the true colours of his sons. Conversely when he became physically blinded it was only then, that he fully understood his son’s real identities. Gloucester also becomes more perceptive with his tragedy, and is almost reiterating central ideas of the play, ‘As flies to wanton Boys, are we to the Gods; they kill us for their sport.’ He is acting as a tool for Shakespeare to display the impact of power amongst people. That mankind is dispensable.

Conflict is the underlying convention Shakespeare uses, giving the audience insight into the real motives of characters good or evil. From this we can determine who really is good, and who is fundamentally evil. The inevitable battle between Edmund and the rest of his family, Edgar and Gloucester almost drives Gloucester beyond the limits of endurance. Gloucester’s overwhelming suffering; both physically and mentally, take its toll, ‘but his heart flawed…burst smilingly’. Similarly, Lear is put through suffering by his ‘pelican daughters’, and grows from it. Initially he is an egotistical, self-centred man which through his suffering acknowledges that fame and power are transitory. By the end of the script Lear has developed into a philosophical, fatalistic old man.

Manipulation is again used by Shakespeare but in an ironic sense, as power is destroyed, harmony is developed. As Lear reconciles with Cordelia, the background music represents Lear’s state of mind. Music is the art of combining vocal and instrumental sound to produce harmony and express emotion. The calmness of the music represents Lear’s psychological state and peace of mind, ‘my own tears do scald like molten lead’. This is ironic as Shakespeare has transformed Lear much the same as the weather. In the dark gloomy storm, Lear was fragile, compared to spring the sign of new life where he is returned to tranquillity.

Shakespeare personifies the struggle for power and its convoluted effect. The script is transformed into another dimension with the use of writing techniques and literary conventions. Irony has been the cornerstone in which the central ideas of the play have been shaped, providing the reader with timeless life lesions. King Lear is a text that advocates the struggle for power and how this impacts individuals. Individuals must be aware of the addictive nature of power and be wary of its destructive ability.