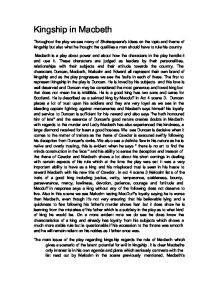 Kingship in Macbeth Throughout the play we see many of Shakespeare's ideas on the topic and theme of kingship but also what he thought the qualities a man should have to rule his country Macbeth is a play about power and about how the characters in the play handle it and use it. These characters are judged as leaders by their personalities, relationships with their subjects and their attitude towards the country. The characters Duncan, Macbeth, Malcolm and Edward all represent their own brand of kingship and as the play progresses we see the faults in each of these. The first to represent kingship in the play is Duncan. He is loved by his subjects and this love is well deserved and Duncan may be considered the most generous and loved king but that does not mean he is infallible. He is a good king has two sons and cares for Scotland. He is described as a sainted king by Macduff in Act 4 scene 3. ...read more.

Also in this scene we see Malcolm testing MacDuff's loyalty saying he is worse than Macbeth, even though it's not very ensuring that his believable lying and a quickness to flee following his father's murder shows fear but it does show he is learning from the mistakes of his father which is a subtlety in the play as to what kind of king he would be. On a more evident note we do see he does know the characteristics of a king and already has loyalty from his subjects which shows a much more stable rule but is questionable if his accession to the throne was smooth and he will remain reliant on his nobles as I father once was. The main issue of the play regarding kingship regards the rule of Macbeth which gives a scenario of the latent potential for evil in kingship. It is clear Macbeths only interest is in his own agenda and plans which seriously contrasts with the list read out by Malcolm in the scene previously mentioned. ...read more.

Addressing the character of Edward even though he doesn't show up on stage at all he is established as Macbeths opposite and contrasting sharply in regards to the religious aspect of the play, the doctor says people are healed by his ''holy touch'' , ''solicits heaven'' and is ''full of grace''. The lord in act 3 scene 6 says he is both ''pious'' and ''holy'' his ''white magic'' runs in opposition to the witches black magic. Edward believes the heart of Scotland can be cured by pray but sends 10'000 men to assist Malcolm and MacDuff showing diplomacy and strategy. Shakespeare contrasts the various modes of kingship in the play, a combination of political manoeuvring, religious and spiritual believe and the kingly graces as defined and appreciated by loyal subjects and the optimistic conclusion that those not in possession of their worth will not be accepted as kings and throughout the play we see the that the countries suffering or prosperity is a direct reflection of the moral of its king. ...read more.

This essay includes many valid points which need to be addressed individually and fully supported with appropriate references from the text. The essay would be improved by consideration of the structure of the answer; taking more time over each point and fully developing each claim. A more specific question would have enabled the study of each character in relation to the question which would have given the essay more direction and ultimately allowed for a more detailed level of analysis.