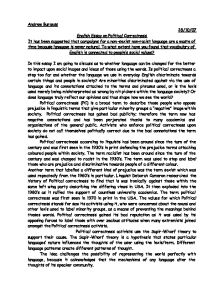 Language and representation has Political Correctness gone too far?

Andrew Burgess 28/10/07 English Essay on Political Correctness It has been suggested that campaigns for a non-s****t non-r****t language are a waste of time because language is never natural. To what extent have you found that vocabulary of English is connected to people's social values? In this essay I am going to discuss as to whether language can be changed for the better to impact upon social images and ideas of those using the words. Is political correctness a step too far and whether the language we use in everyday English discriminate towards certain things and people in society? Are minorities discriminated against via the use of language and its connotations attached to the terms and phrases used, or is the lexis used merely being misinterpreted as wrong by nit pickers within the language society? Or does language truly reflect our opinions and thus shape how we see the world? Political correctness (PC) is a broad term to describe those people who oppose prejudice in linguistic terms that give particular minority groups a "negative" image within society. Political correctness has gained bad publicity; therefore the term now has negative connotations and has been perjorated thanks to many academics and organisations of the general public. Activists who enforce political correctness upon society do not call themselves politically correct due to the bad connotations the term has gained. ...read more.

Whorf states that we isolate experiences (thus stereotyping objects and people) with language which creates and changes our perceptions on life and the world. The language used with which we label our experiences is sometimes in agreement with others. Whorf compared differences between the English language with others such as the Inuit language and Hopi language thus raising the need reason to investigate and analyses the relationship between language thought and reality by relying on close analysis of grammatical structure. To summarise the above the sapir-whorf theory raises the question does language reflect the way we see the world or does it create it? Political correctness took off during the 1980's and early 1990's. Activists had such power that those they scrutinised in particular novelists, journalists and other linguists alike were given very bad publicity and frowned upon by the nation. Political correctness activists claimed those who annoyed them were being some form of ist which was the suffix attached to the end of an adjective to give it the meaning of the person showing prejudice was labelled to be perjorating that of which he was speaking about. This power held by Political correctness activists was feared by many papers and other forms of media which as a result went out of their way to ban words that were deemed sensitive and could be seen as offensive to certain minorities. ...read more.

They argue that in changing linguistic terms changes perceptions and the image painted in our minds by the terms. In conclusion I find it very difficult to determine whether political correctness is a waste of time as I have grown up and been taught as a child in the 1990's therefore have been taught that it is "not write" to use certain phrases and should use others or none at all to describe minorities and parts of the world. Therefore I have an unbalanced view on the matter. I do think to some extent that political correctness is needed as careful wording is the key to not offending a person, however I will contradict myself in saying that there is little need to change or eradicate any linguistic terms as language does influence the way we think but does not reflect it perfectly as the context in which words are used in is constantly changing. The English language is renound for it words that mean bad are changed to mean good especially by the younger teenage generations for example the word sick is often used in place of the word cool for dramatic effect. It is quite scary to think that political correctness can be used to silence an individual or organisation that speaks out against society when we are supposed to be living in a free democratic society where we have freedom or speech and choice. ...read more.


This is a complex question with many issues that need to be addressed. The writer has made a good effort to answer the question in full. Good use of technical vocabulary throughout and the essay is structured logically. Evidence of wider reading and research. Some points needed further exploration and exemplification.