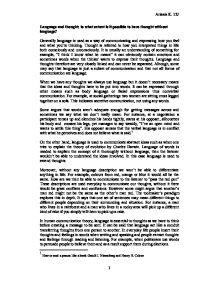 Language and thought; to what extent is it possible to have thought without language

Language and thought; to what extent is it possible to have thought without language? Generally language is used as a way of communicating and expressing how you feel and what you're thinking. Thought is referred to how you interpreted things in life both consciously and unconsciously. It is usually an understanding of something for example, "I think I know what he means" it can obviously contain emotions and sometimes words when the thinker wants to express their thoughts. Language and thoughts therefore are very closely linked and can never be separated. Alhough, some may say that language is just a subset of communication and that not all forms of communication are language. When we have any thoughts we always use language but it doesn't necessary means that the ideas and thoughts have to be put into words. It can be expressed through other means such as body language or facial expressions thus nonverbal communication. For example, at social gatherings two women are sitting cross legged together on a sofa. This indicates secretive communication, not using any words. Some argues that words aren't adequate enough for getting messages across and sometimes we say what we don't really mean. For instance, at a negotiation a participant tenses up and clenches his hands tightly, stares at his opposer, silhouettes his body and crosses his legs, yet manages to say weakly, "I've an open mind and wants to settle this thing". ...read more.

Language is sometimes used to enforce power on others. For example scientists talk about broken heart syndrome using the word "cardiomyopathy" the two words mean the same thing but by using specific terminology that an average person doesn't know does make the scientists "appears" to be more articulate. However the semanticity of words can cause ambiguity when thoughts are being transferred. This is because people tends to interpreted words differently due to different background as we often heard "That isn't what I meant to say" when a person might offends someone and misunderstandings occurs. Our thoughts are fairly more complex and by putting it in simply symbols of words we can't clarify our thoughts exactly. For instance, in translation errors which is based on alternative word meaning at the dry cleaners in Bangkok has a sign that say, "Drop your trouser here for best result" Some people might interpreted this in a s****l way. Some might argue that it is possible to have thought without language such as an automatic response to danger when we accidentally touch a hot pot of coffee we instantly pull our hands away spontaneously out of instinct. When we did this, we did not think in our heads, "Oh It's hot, so I should pull my hands away" therefore we can obviously think without using language. ...read more.

This is because they do not actually "talk" about the nectar. Therefore it would be false to claim that their dance is a form of language. However if we take another evidence of Gardener's in 1970S with Washoe, a chimpanzee that develops novel expression by developing the vocabulary it knows to describe a swan water bird using sign language. To be able to complete this task, the chimpanzee must obviously think and use language to describe something that it not in its previous vocabulary. This suggests that apes are smarter than their language capabilities. Essentially language is very powerful and it can be used extend, direct and even limit our thinking depending on how you use language and interpreted it. It allows us to communicate abstract thoughts and ideas but at the same time it can limit our ideas due to our perceptions of the language used to express. Language is therefore essential when we want to communicate abstracts thoughts or complicated theory to another human being but however interpretations and the liability of the information is not ensured. We use language to express thoughts but however we can use other forms of communication to express our thoughts such as facial expressions or when animals may "speaks" with their own "sound" 1 How to read a person like a book Gerald I. Nierenberg and Henry H. Calero ?? ?? ?? ?? Arisara K. 12J 1 ...read more.