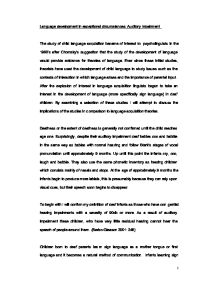 Language development in exceptional circumstances: Auditory Impairment The study of child language acquisition became of interest to psycholinguists in the 1960's after Chomsky's suggestion that the study of the development of language would provide evidence for theories of language. Ever since these initial studies, theorists have used the development of child language to study issues such as the contexts of interaction in which language arises and the importance of parental input. After the explosion of interest in language acquisition linguists began to take an interest in the development of language (more specifically sign language) in deaf children. By examining a selection of these studies I will attempt to discuss the implications of the studies in comparison to language acquisition theories. Deafness or the extent of deafness is generally not confirmed until the child reaches age one. Surprisingly, despite their auditory impairment deaf babies coo and babble in the same way as babies with normal hearing and follow Stark's stages of vocal pronunciation until approximately 9 months. Up until this point the infants cry, coo, laugh and babble. They also use the same phonetic inventory as hearing children which consists mainly of nasals and stops. At the age of approximately 9 months the infants begin to produce more labials, this is presumably because they can rely upon visual cues, but their speech soon begins to disappear. ...read more.

A native signer is able to reproduce any phrase produced by the English Language just as fully and quickly as a speaker of the language. These facts alone contribute towards understanding 'sign' as a real language, highlighting the theory that language is not modality specific. The study by Bellugi and Klima illustrates that Infants who learn Sign Language as a first language with exposure from birth can develop full language system without delay or impairment. Further evidence from Bonvillain, Orlansky and Novak (1983) showed that infants actually develop sign ahead of speech. They studied a group of hearing children acquiring ASL as a first language from deaf parents who were native signers. Bonvillain, Orlansky and Novak discovered that the children produced their first signs at an average age of 8.6 months whereas children do not produce speech until they are approximately 11months. They also discovered that the children produced combinations of signs at 17 months compared with the period of 18-20 months in children acquiring oral language. From their study they concluded that children with native signers as an input model developed sign language quicker that oral language. However, there were some limitations on their theory. Hearing children also gesture, producing the problem of what is a gesture and what is an actual sign. ...read more.

while signing to other people. They concluded that although children do bring innate capabilities to language learning the role of parental input is required for those capabilities to flourish. Children of deaf parents often have very little exposure to language until they reach schooling age, or develop relationships with other members of the deaf community. Deaf children are therefore isolated from their parents. This delay and Isolation has Implications for critical age hypothesis as the deaf may be only neurological normal adults that reach adulthood without a full language system. I am however limited by word count but expect this would be an interesting area of further study. To conclude, I hope to have demonstrated a number of points in this essay. Firstly, the differences between signed and spoken languages are only superficial. Therefore we can conclude that language is modality independent and can exist in both the auditory-vocal and manual-visual channels. Deaf children are able to acquire 'language' despite change in modality. However, the development of language can only occur where children are provided with some input. Yet despite this, the need to communicate and attempts made my children to sign indicate 'innate' and robust qualities of language. The studies above, and indeed the large amount of studies on Deaf children can only suggest that the studies in the area of sign language can inform us, not only about sign language, but theories of oral language too. ...read more.