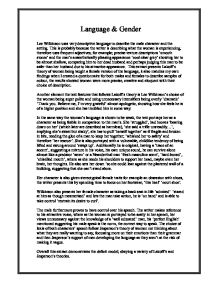 Language & Gender Lee Wilkinson uses very descriptive language to describe the male character and the setting. This is probably because the writer is describing what the woman is experiencing, therefore uses frequent adjectives, for example; precise texture descriptions 'smooth stones' and the man's anaesthetically pleasing appearance 'cool clear grey' showing her to be almost shallow, comparing him to her dead husband and perhaps judging this man to be safer than her husband due to his attractive appearance. This extract presents Lakoff's theory of women being taught a female version of the language, it also matches my own findings when I created a questionnaire for both males and females to describe samples of colour, the results showed women were more precise, creative and eloquent with their choice of description. ...read more.

She 'struggled', had hooves 'bearing down on her' (which later are described as harmless), 'she said a trifle unsteadily...', implying she's sweet but shaky', she has to pull 'herself together' as if fragile and broken in bits, needing the glue of a man to keep her together; 'whisked her to safety' and therefore 'her rescuer'. She is also portrayed with a vulnerable, childlike tendency of being lifted and swung around 'swept up'. Additionally he is original, having a 'trace of an accent', suggesting a mixture in his voice, his own unique sound, he can survive alone almost like a predator 'raven' or a Neanderthal man 'fresh masculine scent', 'hard-boned', 'chiselled mouth', where as she needs his shoulders to support her head, maybe even her brain, her thoughts. ...read more.

The male furthermore proves to have control over his speech. The writer makes reference to his attractive voice, where as the woman is portrayed to be scatty in her speech, her views unnecessary against the knowledge of a 'well educated' man, his 'perfect English' mentioned suggesting his male speak is the norm, the correct way to speak. The choice of lexis of both characters' speech follow Jesperson's theory of women not thinking about what they are really wanting to say, focussing more on their emotions than their grammar and then Jesperson's support of men developing the language as they aren't at the risk of making it vague. Overall this extract demonstrates the deficit model, obeying a variety of Lakoff's and Jesperson's theories. ...read more.