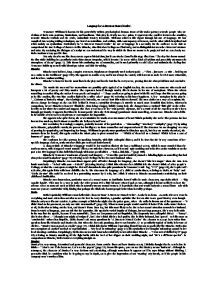 Language in 'A Streetcar Named Desire'.

Language in 'A Streetcar Named Desire' Tennessee Williams is known for his powerfully written psychological dramas. Most of his works portray neurotic people who are victims of their own passions, frustrations, and loneliness. This play is clearly no exception. It represents the conflict between the sensitive, neurotic Blanche DuBois and the crude, animalistic Stanley Kowalski. Williams achieves this vigour through his use of language. He has compiled two varying writing techniques, one based on naturalism and realism, with contemporary references, and the other which is stylised and relies mainly on symbolism. Particularly in 'A Streetcar Named Desire' the use of language is a necessity for the audience to be able to comprehend the true feelings of characters like Blanche, who hides her feelings so effortlessly, and to distinguish between the characters' statuses and roles. By analysing the dialogue of a script we can understand the way in which the lines are meant to be projected and we can clearly see their emotions at any specific time. Not only does he use his characters to express his lyricism, but it can also be found in his stage directions. "The sky that shows around the dim white building is a peculiarly tender blue almost turquoise, which invests the scene with a kind of lyricism and gracefully attenuates the atmosphere of decay" (page 1). ...read more.

It is probable that you would only use a s****l innuendo with someone you are comfortable with, hinting that perhaps she thinks she knows people better than in reality perhaps. Stella Stella is probably William's most believable character from 'A Streetcar Named Desire'. As she is so down-to-earth. She sees sense in everything and more often than not tries to see the best in every situation, a genuine optimist. She is even able to see good Stanley even though Blanche only sees his curt exterior. A prime example of this is the night after the poker game, when the radio is thrown out of the apartment - "It didn't land on the pavement, so only one tube was smashed" (page 48). Whereas most people would consider it better if the radio wasn't broken at all, Stella tries to bring out the best, and doesn't blame Stanley, but this most likely to be due to her s****l attraction towards her husband. From her style of language, you can tell that she's genuine. She speaks in varied lengths of dialogue, but not long passages. She's very believable in the way that she speaks, because it's so naturalistic. There are few pauses and no linguistics. She frequently uses colloquial dialect - "honey". ...read more.

Mitch is a meaningless character; he doesn't reveal his true identity throughout the whole play. His use of questions is very obvious, its his individual way of developing a conversation, with little success - After Blanche discusses the inscription in his cigarette case clearly having heard of them, Mitch says - "You know it?" (page 38) Mitch is portrayed as the most gentle of the men in 'A Streetcar Named Desire'. He uses gentle words in the presence of Blanche, and his sensitivity shines through in his language, however it seems he is far from the knight in shining armour she was hoping for. The gentlemen in her past were more elaborate, richer, and possibly a lot more gallant, however she believes herself to be a 'wilting flower' so she may also deem him to be the best she can do. Through the language of the characters, it becomes easier to distinguish the differences and similarities of them. The language and accents are used to help set the scene in New Orleans with Pablo, Stanley and Blanche all being in the same place, but of completely different origin. The diversity can be seen in the characters through their use of language and the way in which they present their lines. Contributing to the visual aspects, lines give a sense of place and person and how they interact with one another. Emily Huntley ...read more.