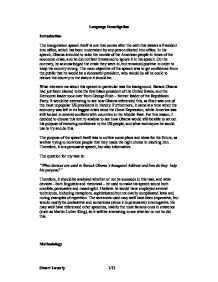 Language Investigation Introduction The inauguration speech itself is one that comes after the oath that swears a President into office, which has been undertaken by any person elected into office. In his speech, Obama intended to raise the morale of the American people in times of the economic crisis, and he did not feel threatened to ignore it in his speech. On the contrary, he acknowledged the crisis they were in, but remained positive in order to keep the country strong. The main objective of the speech was to get confidence from the public that he would be a successful president, who would do all he could to restore the country to the stature it should be. What interests me about this speech in particular was the background. Barack Obama had just been elected to be the first black president of the United States, and the Democrat leader took over from George Bush - former leader of the Republican Party. It would be interesting to see how Obama referenced this, as Bush was one of the most unpopular US presidents in history. Furthermore, it came at a time when the economy was left in its biggest crisis since the Great Depression, while America was still locked in several conflicts with countries in the Middle-East. For this reason, I decided to choose this text to analyse to see how Obama would still be able to set out his purpose of restoring confidence to the US people, and what techniques he would use to try and do this. The purpose of the speech itself was to outline some plans and ideas for the future, as well as trying to convince people that they made the right choice in electing him. Therefore, it is a persuasive speech, but also informative. The question for my task is: "What devices are used in Barack Obama's Inaugural Address and how do they help his purpose?" ...read more.

This is done to make more of the speech memorable, and especially emphasises the troubles they will need to go into to get back on their feet. Conclusion In my introduction, I stated in my hypothesis what I expected to see from the Barack Obama speech. I believe that he used most of the techniques that I suggested he would, such as the used of sophisticated but not complicated lexis, such as "consequence", "reaffirm" and "enduring". As expected, this was to remain professional and credible in his speech, but also making sure that his points were well presented. Furthermore, he also used intertextuality, as I expected. He used devices from the Martin Luther King speech, such as contrasting pairs, while also taking small phrases such as "God Bless" from previous inaugural addresses. What I did not predict was the most commonly words used, however it makes sense that the ones used most frequently were "must", which implies the imperativeness that the country needs to get through the crisis. As would have been expected, words such as America were very commonly used also. However, I also expected, due to this speech being persuasive, for Obama to use interrogative statements (or rhetorical questions). However, he refrained from doing this, and instead kept them all declarative, which was very surprising and went against my hypothesis. However, this did not stop it from being persuasive, as shown by the powerful language (such as the abstract nouns). In my investigation, I could have perhaps improved it by picking apart individual sentences and outlining why specific words and nouns were used. I could have also improved by using more statistical analysis, as opposed to just using the most commonly used words. Instead, I focused more on specific phrases, and techniques used. Bibliography www.nytimes.com - for the transcript of Barack Obama's inauguration address. http://www.bartleby.com/124/ - for transcript of previous inauguration addresses. ...read more.

This is the price and the promise of citizenship. This is the source of our confidence - the knowledge that God calls on us to shape an uncertain destiny. This is the meaning of our liberty and our creed - why men and women and children of every race and every faith can join in celebration across this magnificent mall, and why a man whose father less than sixty years ago might not have been served at a local restaurant can now stand before you to take a most sacred oath. So let us mark this day with remembrance, of who we are and how far we have traveled. In the year of America's birth, in the coldest of months, a small band of patriots huddled by dying campfires on the shores of an icy river. The capital was abandoned. The enemy was advancing. The snow was stained with blood. At a moment when the outcome of our revolution was most in doubt, the father of our nation ordered these words be read to the people: "Let it be told to the future world...that in the depth of winter, when nothing but hope and virtue could survive...that the city and the country, alarmed at one common danger, came forth to meet [it]." America. In the face of our common dangers, in this winter of our hardship, let us remember these timeless words. With hope and virtue, let us brave once more the icy currents, and endure what storms may come. Let it be said by our children's children that when we were tested we refused to let this journey end, that we did not turn back nor did we falter; and with eyes fixed on the horizon and God's grace upon us, we carried forth that great gift of freedom and delivered it safely to future generations. Thank you. God bless you. And God bless the United States of America. Stuart Laverty 1/13 ...read more.