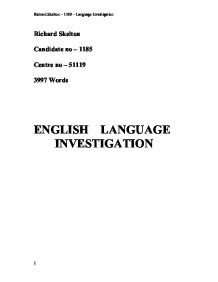 Language investigation into the language used by George Bush on the day of and days following the september 11th attacks.

Richard Skelton Candidate no - 1185 Centre no - 51119 3997 Words ENGLISH LANGUAGE INVESTIGATION Contents Page 1. Title Page 2. Contents 3. Introduction 4. Hypothesis 5. Methodology 6. Pragmatic Features 7. Prosodic Features 8. Lexical Features 9-10.Grammatical and Semantic Features 11.Discourse and Structural Features 12.Conclusion 13.Evaluation 13.Bibliography 14 - . Texts Introduction My English Language investigation centres around the change in the language used by George Bush, on the day of and days following the September 11th terrorist attacks. This includes addresses to the nation, a speech to congress and speeches on the days of national remembrance. My particular main areas of investigation will centre on speech devices and the change in tone depending on the audience of the speech. Although I have chosen to investigate speech, my focus will be more around the content of the speech, euphemistic devices and the tone that Mr Bush sets rather than transcript conventions. Phonology, lexis, orthography, pragmatics, grammar, semantics and discourse are all key areas. My inspiration for this investigation is two-fold. During a conversation with my English Language teacher, the idea of investigating speech came up and then I paired this with a George Bush speech that I received as a homework task. This combination inspired me to investigate the language further. What makes this choice even more interesting is that September 11th 2001 was an event that rocked the confidence of the American people and saw the most powerful country, led by the most powerful man, falling to their Knees against a 'series of deliberate and deadly terrorist attacks (address to the nation 9/11/01).' Hypothesis I expect that the speeches given by George Bush on the day of the September 11th terrorist attack and the speeches of the days following will change in tone and impact, Focusing more heavily on positive language and patriotism. Methodology All of the evidence in terms of the actual physical speeches used in my investigation was easy enough to find on the White House website found at http://www.whitehouse.gov/. ...read more.

The use of the second person, and the collective pronouns; 'we, our and they,' give the speech a much more universal appeal and a sense of segregation with the 'civilised world,' on one side and the 'terrorists,' on the other. Also apparent in this text is a separation of positive and negative adjectival sentences for emphasis on the good and evil divide. The passengers on flight 92 are described as having made 'a heroic effort,' where as the terrorists are accredited with causing 'a series of despicable acts of terror.' The differences in connotations in 'heroic,' and 'despicable,' are enough that any person of any age or intelligence will be able to understand the main focus of the speech. If you take these words right down to the simplest level and their phonological devices, the adjective 'despicable,' is a very harsh sounding word that you almost spit out rather than simply saying it. Text 3 also relies on prosodic features. The speech starts with the crowds' cheer of U.S.A! U.S.A! An exclamation usually only heard in times of national celebration, however in this case as a sign of national unity. As a phonological device this simple repetition of an acronym is a physical sign of unity. President Bush uses clever wordplay to interact with the audience, and so when one person proclaims 'I can't hear you,' Mr Bush uses repetition of the verb hear 'I can hear you, the rest of the world hears you, the people who knocked these buildings down will hear all of us soon,' as a show that the world is not a big place and that America and her allies will hunt down the terrorists. Where texts 1 and 2 take the role of a stereotypical, cautious presidential speech, this speech is a direct verbal attack to the terrorists showing that although America is physically bruised, its resolve stands strong. ...read more.

The semantics or word meanings of this text are equally as interesting as the first text. Bush in no way tries to use euphemisms in the first paragraph (full description of the attacks) as the attacks themselves were so public, with video evidence and constant news feeds, and so there was no need to try to sugar-coat the truth. The combination of physical nouns such as 'passenger jet, twin tower and Pentagon' with hard, descriptive verb 'killing,' and the noun 'carnage' with real statistics 'killed more than 250 airplane passengers,' leave no room to try to deny the reality of the event. Looking further on in the text where we find words with negative connotations such as 'evildoers,' in almost all cases there is a show of American strength within the next few lines so 'evildoers,' is followed by 'punished severely,' with the adverb 'severely' showing the severity of American resolve. The grammatical features of text 3 are harder to fully investigate because the text itself is a transcript, however some grammatical devices can still be found. In the first main section of speech immediately there is a strong use of personification in the line 'America is on bended knee,' as this not only suggests the American people are in prayer, but America itself as an object/person. There is also alliteration in the quote 'workers who work here,' yet more personification 'this nation stands,' and also repetition 'I can hear you, I can hear you.' Mr Bush uses his position as the person giving the speech as much as the voice of the people 'the nation sends its love and compassion to everybody who is here,' as he does personally 'I want you all to know...' The use of the first person in this speech allows more feeling and thoughts to be presented rather than facts and data which would by now have probably saturated the media. Continuing from the grammar and looking at the semantics of the speech, I felt that the biggest change was the tone of the piece, and with it the type of word classes used. ...read more.