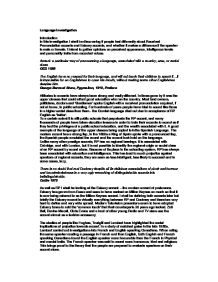 Language investigation Introduction In this investigation I shall be discovering if people feel differently about Received Pronunciation accents and Estuary accents, and whether it makes a difference if the speaker is male or female. I intend to gather opinions on perceived appearance, intelligence levels and personality traits from recorded voices. Accent: a particular way of pronouncing a language, associated with a country, area, or social class. OED 1999 The English have no respect for their language, and will not teach their children to speak it...It is impossible for an Englishman to open his mouth, without making some other Englishman despise him. George Bernard Shaw, Pygmalion, 1912, Preface Attitudes to accents have always been strong and vastly different. In times gone by it was the upper classes that could afford good education who ran the country. Most land owners, politicians, doctors and 'Gentlemen' spoke English with a received pronunciation acquired, if not at home, in public schooling. For hundreds of years people have tried to sound like those in a higher social class than them - the Cornish language died out due to acceptance of RP English as 'better'. To a certain extent it is still public schools that perpetuate the RP accent, and many thousands of people have taken elocution lessons in order to train their accents to sound as if they had the privileges of a public school education, and the wealth associated with it. ...read more.

It an also be because, as Trudgill points out, society generally expects more co-operation to the 'acceptable norms' from women. In this case, more standard accent. From these points we can make the assumption that women who speak with a non-RP accent will be considered to display the negative qualities associated with the machoistic regional accent. Aims My aim is to discover the answer to the question; how do people respond to RP and Estuary accents, and do they respond differently to men and women with the same accent? I shall be studying attitudes of the general public towards accents. In doing this I aim to discover what attitudes at accents are. I am hoping to be able to make a statement about which accent between Received Pronunciation and Estuary is seen as more intelligent and which is friendlier. My hypothesis is that people will find the Estuary accent more friendly but less intelligent than the RP. Peter Trudgill states; 'Our accent and our speech generally show where we come from and what sort of background we have. We may even give some indication of certain of our ideas and attitudes and all of this information can be used by the people we are speaking with to help them formulate an opinion about us.' ...read more.

Asking a person's general opinion of voices would be very difficult to compare with other answers, and without having such a large number of participants I cannot guarantee that it is not the voice people are responding to rather than the accent. This method is sadly very time consuming, and that limits the people I can survey. It does however hopefully give me conclusive results that I can be sure are accurate. Analysis The individual research sheets are attached, but here I shall give a summary of the results. Voice Number Average Friendliness Average Intelligence Other Comments 1: Estuary Male 2 2 Friendly, Happy 2: Estuary Female 1 3 Giggly, Silly, Stupid 3: RP Female 4 1 Boring 4: Estuary Female 1.5 4 Blonde, Thick 5: RP Male 4 1 Boring, Posh 6: RP Female 2 2 Posh, Pretty 7: Estuary Male 2 3 Nice, Fun, Dirty 8: RP Male 3 2 Old Estuary Male Estuary Female RP Male RP Female Accent Divide Gender Divide These results show a clear divide between opinions of Estuary speakers and RP speakers and Men and Women I would like to be able to collect more sample voices in order to rule out the possibility that the individual voices display characteristics of friendliness or intelligence, and to play the voices to more people, sadly, time and facilities prevent this. If this were possible, I would be able to get a much more accurate view of opinions and make more of a firm conclusion. ...read more.