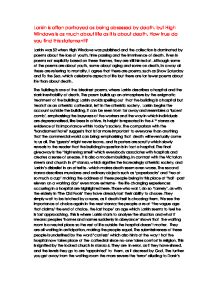 Larkin is often portrayed as being obsessed by death, but High Windows is as much about life as it is about death. How true do you find this statement?

Larkin is often portrayed as being obsessed by death, but High Windows is as much about life as it is about death. How true do you find this statement? Larkin was 52 when High Windows was published and the collection is dominated by poems about the loss of youth, time passing and the imminence of death. Even in poems not explicitly based on these themes, they are still hinted at. Although some of the poems are about youth, some about aging and some on death, in a way all these are referring to mortality. I agree that there are poems, such as Show Saturday and To the Sea, which celebrate aspects of life but there are far fewer poems about life than about death. The Building is one of the bleakest poems, where Larkin describes a hospital and the stark inevitability of death. The poem builds up an atmosphere by the enigmatic treatment of the building; Larkin avoids spelling out that the building is a hospital but treats it as an atheistic cathedral, left in the atheistic society. Larkin begins the account outside the building. It can be seen from far away and resembles a 'lucent comb', emphasising the busyness of the workers and the way in which individuals are depersonalised, like bees in a hive. ...read more.

They are in error, as if they have sinned, and the levels they go to are 'appointed' to them, as if decreed by God. The further you get away from the waiting room the more severe the 'error' alluding to Dank's 'The Divine Comedy' with the levels of h**l, again illustrating the hospitals displacement of religion. Poignantly, their eyes 'Go to each other, guessing' as if they might contact and share their worries, but when 'someone's wheeled past in washed to rags ward clothes' the image of what they will become silences them. To communicate would risk acknowledging their mortality. The people described have lived in 'self-protecting ignorance' but this now comes to an end, expressing Larkin's fixation on death. In stanza 8 the poem moves towards a conclusion, Larkin begins to spell out that we are all going to die in our own conclusion. The 'unseen congregations' in 'white rows' are patients in their beds but also the dead in their graves. Finally at the start of stanza 9 we are told that 'All know they are going to die' The hospital suggests a final end to human life and represents 'a struggle to transcend/ The thought of dying'- it offers a limited hope but doesn't keep death itself away, just the thought of it. ...read more.

This is a sensitive view of the mental state of those who begin to lose touch with reality. The 'sun's/ Faint friendliness on the wall' is so slight a comfort as to emphasise the overall bleakness of life for the elderly. Larkin tries to explain to himself and the reader the 'air of baffled absence' surrounding the elderly as their desire to live in the past, but still forced to live in the present. The image of the rooms inside peoples heads growing farther away is like the receding hospital rooms in The Building, each room being nearer to death. For me the most striking image is 'Extinction's alp'- the word extinction seems more extreme than death, if possible, and the use of the singular (instead of Alps as we would usually say) makes death seem even more unavoidable, and it is death's very proximity that makes it harder to see clearly. It is ahead of us all our lives which clearly shows that Larkin is obsessed with it. Old age in this poem is e seen as horrifying, because it is so humiliating and you are left without choice. The final line 'we shall find out' leaves the reader reminded that it will happen to them. Larkin, then, is very concerned with death in High Windows; he regrets the passing of his own youth and contemplates old age, the inevitability of death and human fear of death throughout the collection. ...read more.

This is, in many ways, a very good essay that responds sensitively to Larkin's poetry. Its problem is that it never really engages directly with the question, making a series of individual perceptive points rather than forming an argument.