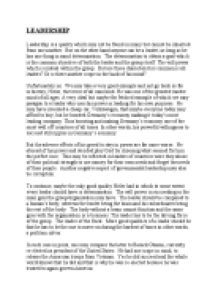 ﻿LEADERSHIP Leadership is a quality which may not be found in many but cannot be inherited from one another. But on the other hand anyone can be a leader; as long as he has one thing in mind determination. The determination to obtain a goal which is the common objective of both the leader and the group itself. The will power which is mutual within the group. But are these characteristics common is all leaders? Or is there another scope in the back of his mind? Unfortunately no. We may take a very good example and not go back so far in history, Hitler, the terror of all man kind. ...read more.

This may be reflected in leaders of countries were they abuse of their political strength to use money for their own needs and forget the needs of their people. Another negative aspect of governmental leadership may also be corruption. To continue, maybe the only good quality Hitler had in which to some extent every leader should have is determination. The will power in succeeding in the main goal the group/organisation may have. The leader should be compared to a human?s body, whereas the leader being the brain and his subordinates being the rest of the body. The body without a brain cannot function and the same goes with the organisation or a business. ...read more.

Favouritism is another terrible characteristic a leader may have. Other examples may include mentally abusing co workers because they may take advantage of their power. Such case in point when critising the person in front of his other co-workers, instead of telling them how to improve. Other severe cases may be s****l abuse which then one must immediately report to the police or union. Being a leader may not always be plain sailing. The world we live in is always a constant battle against evil, and so one must thrive to be successful. It may be like walking through water of treacle. The qualities of a leader are the most important factor which will either lead the group or organisation to either success or complete failure. ...read more.