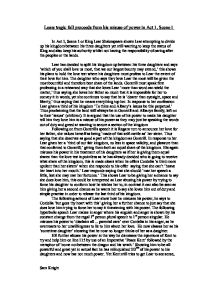 Lears tragic fall proceeds from his misuse of power in Act 1, Scene 1 In Act 1, Scene 1 or King Lear Shakespeare shows Lear attempting to divide up his kingdom between his three daughters yet still wanting to keep the status of King and also keep his authority whilst not having the responsibility of caring after the peoples or the lands. Lear has decided to split his kingdom up between his three daughters and says 'which of you shall love us most, that we our largest bounty may extend,' this shows his plans to hold the love test where his daughters must profess to Lear the extent of their love for him. The daughter who says they love Lear the most will be given the most bountiful and therefore best share of the lands. Gonerill must speak first professing in a rehearsed way that she loves Lear 'more than word can wield the matter,' thus saying she loves her father so much that it is impossible for her to convey it in words, yet she continues to say that he is 'dearer than eyesight, space and liberty,' thus saying that he means everything top her. ...read more.

how he wishes her to, in contrast it can also be seen as him giving her a second chance as he wants her to say she loves him out of duty and simple practise in order to release the last third of his kingdom. The following actions of Lear show how he misuses his power, he says to Cordelia 'but goes thy heart with this' giving her a further chance to just say that she does love him trying to force her to say it threatening with his power. The following hyperbolic speech Lear makes in anger where his anguish and anger is shown by his constant change from the regal 1st person plural speech to 1st person singular. He misuses his power to 'disclaim all ... parental care' over Cordelia in his anger, as he overreacts to her unwillingness to lie to him about her love. He now classes her as his 'sometime daughter' showing that he now no longer thinks of her as a daughter. HE further abuses his power in the way he dismisses the injections of Kent to try and help him on line 115 by use of an Imperative 'Peace Kent' followed by the metaphor of 'come not between the dragon and his wrath.' ...read more.

In conclusion it is clear that Lear does misuse his power initially in holding the love test, it is quite clearly a psychological game in which Lear just wants to hear the words behind the flattery and not actually notice any sincerity in their meanings. He carries on however to demand an answer from Cordelia showing that he it trying to bully her into saying she loves him. Later however having denied Cordelia of any dowry splits the Kingdom between Gonerill and Regan, leaving him from that point owning no land, yet he then proceeds to banish Kent from "his" kingdom which technically does not exist, this is clearly a misuse of the remnants of power that he still has and the short tempered way he reacts to the comments of Kent and Cordelia by saying that he loved Cordelia most but is now banishing her would make his other daughter whom now have power bitter at the lack of love they receive from their father, in my opinion the fall of Lear proceeds from the way he gives all his power to Gonerill and Regan but then progressing to offending them by saying he loves Cordelia more. Sam Knight ...read more.