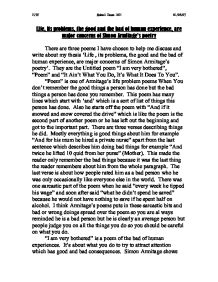 Life, its problems, the good and the bad of human experience, are major concerns of Simon Armitage's poetry.

He put a pair of plastic handled scissors over a hot Bunsen burner until it was soft and melting slowly and gave it to a female pupil. When she held it around her fingers he described the scene as "O the unrivalled stench of branded skin as you ..." meaning it was so bad no other bad smell could compete with it and that it left a mark of dull, dark, black, burnt skin. There was a burnt ring around one of her fingers and one of her thumbs that were marked for life. He described his feelings of this horrific atrocity by saying "Don't believe me if I say that was just my butterfingered way at thirteen, of asking you if you would marry me" butterfingered way meaning not really meaning it, not seriously so he means don't believe be if I said I was only joking when I said will you marry me. ...read more.

For example from the poem 'Poem' the problem of the man only remembered by the bad points and that man has to deal with that in the right way by defending himself and the people who rate him also have to be careful on what they say about people. We have to try and live through it all without it bringing us down and making us feel miserable. For example 'The untitled poem about him very bothered about the girls burnt fingers we have to deal with the fact that it happened and to let it go and get on with our lives. We also have to make sure we don't make wrong decisions just to make ourselves feel happy and don't care about the others. For example again to the untitled poem Simon should of thought of the consequences and the pain of others but he didn't he was only seeking attention for himself. Now I hope you now know Simon Armitage poems are based on life's good and bad experiences. H/W Sohail Deen 10H 01/05/07 ...read more.