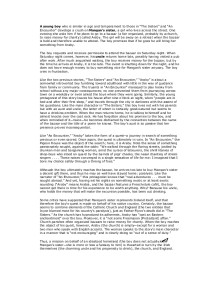 Like the two previous stories, &quot;The Sisters&quot; and &quot;An Encounter,&quot; &quot;Araby&quot; is about a somewhat introverted boy fumbling toward adulthood with little in the way of guidance from family or community. The truants in &quot;An Encounter&quot; managed

A young boy who is similar in age and temperament to those in "The Sisters" and "An Encounter" develops a crush on Mangan's sister, a girl who lives across the street. One evening she asks him if he plans to go to a bazaar (a fair organized, probably by a church, to raise money for charity) called Araby. The girl will be away on a retreat when the bazaar is held and therefore unable to attend. The boy promises that if he goes he will bring her something from Araby. The boy requests and receives permission to attend the bazaar on Saturday night. When Saturday night comes, however, his uncle returns home late, possibly having visited a pub after work. After much anguished waiting, the boy receives money for the bazaar, but by the time he arrives at Araby, it is too late. The event is shutting down for the night, and he does not have enough money to buy something nice for Mangan's sister anyway. The boy cries in frustration. Like the two previous stories, "The Sisters" and "An Encounter," "Araby" is about a somewhat introverted boy fumbling toward adulthood with little in the way of guidance from family or community. ...read more.

Although the boy ultimately reaches the bazaar, he arrives too late to buy Mangan's sister a decent gift there, and thus he may as well have stayed home: paralysis. Like the narrator of "An Encounter," this protagonist knows that "real adventures . . . must be sought abroad." And yet, having set his sights on something exotic or at least exotic sounding ("Araby" means Arabia, and the bazaar features a French-style caf�), the boy cannot get there in time for his experience to be worth anything. Why? Because his uncle, who holds the money that will make the excursion possible, has been out drinking. Some critics have suggested that Mangan's sister represents Ireland itself, and that therefore the boy's quest is made on behalf of his native country. Certainly, the bazaar seems to combine elements of the Catholic Church and England (the two entities that Joyce blamed most for his country's paralysis), just as Father Flynn's death did in "The Sisters." As the church has hypnotized its adherents, Araby has "cast an Eastern enchantment" over the boy. Moreover, it is "not some Freemason [Protestant] affair." ...read more.

When the protagonist finally arrives at the bazaar, too late, the reader wants so badly for the boy to buy something, anything, for Mangan's sister that when he says "No, thank you" to the Englishwoman who speaks to him, it is heartbreaking. "Gazing up into the darkness," the narrator says, "I saw myself as a creature driven and derided by vanity; and my eyes burned with anguish and anger." The eyes of Joyce's readers burn, too, as they read this. One final point: Though all are written from the first-person point-of-view, or perspective, in none of the first three stories in Dubliners is the young protagonist himself telling the story, exactly. It is instead the grown-up version of each boy who recounts "The Sisters," "An Encounter," and "Araby." This is shown by the language used and the insights included in these stories. A young boy would never have the wisdom or the vocabulary to say "I saw myself as a creature driven and derided by vanity." The man that the boy grew into, however, is fully capable of recognizing and expressing such a sentiment. Joyce's point-of-view strategy thereby allows the reader to examine the feelings of his young protagonists while experiencing those feelings in all their immediate, overwhelming pain. ...read more.