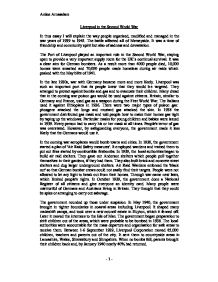 Liverpool in the Second World War.

Liverpool in the Second World War In thus essay I will explain the way people organised, modified and managed in the war years of 1939 to 1945. The battle affected all of Merseyside. It was a time of friendship and community spirit but also of sadness and devastation. The Port of Liverpool played an important role in the Second World War, staying open to provide a very important supply route for the UK's continual survival. It was a clear aim for German bombers. As a result more than 4000 people died, 10,000 homes were smashed and 70,000 people made homeless during air raids which peaked with the May blitz of 1941. In the late 1930s, war with Germany became more and more likely. Liverpool was such an important port that its people knew that they would be targeted. They arranged to protect against bombs and gas and to evacuate their children. Many dread that in the coming war poison gas would be used against citizens. Britain, similar to Germany and France, used gas as a weapon during the First World War. The Italians used it against Ethiopians in 1936. There were two major types of poison gas: phosgene attacked the lungs and mustard gas attacked the skin. In 1938 the government distributed gas mask and told people how to make their homes gas tight by taping up the windows. Particular masks for young children and babies were issued in 1939. Every person had to carry his or her mask at all times. People's terror of gas was overstated. However, by safeguarding everyone, the government made it less likely that the Germans would use it. In the coming war aeroplanes would bomb towns and cities. In 1938, the government started a plan of 'Air Raid Safety measures'. It employed wardens and trained them to put out fires started by combustible firebombs. In 1939, the local authorities began to build air raid shelters. ...read more.

Over 2,000 people had been killed, and many more badly injured. The Durning Road tragedy The direct hit on the large underground shelter in Durning Road, Edge Hill, was the worst single incident in the Liverpool Blitz as regards to loss of life. This occurred in the early hours of 29 November 1940, during the heaviest air raid to date. About 300 people were tightly packed into a shelter in the basement of Edge Hill Training College in Durning Road. When a parachute mine hit the building, it collapsed into the shelter below, crushing many of its occupants. Boiling water from the central heating system and gas from fractured mains poured in. Raging fires overhead also made rescue work extremely dangerous. In all, 166 men, women and children were killed. Many more were badly injured. The German air raids of 1940-42 caused annihilation on both sides of the Mersey. About 4,000 people were killed, including 2,736 in Liverpool, 454 in Birkenhead and 424 in Bootle. In Liverpool, many docks and their regions were reduced to rubble. A number of ships were sunk in the docks and river. Much of the city centre was devastated, including the main shopping and business areas. Some of the city's best-known buildings were destroyed, including the Customs House, the Cotton Exchange, the Rotunda Theatre and Lewis's department store. The City Museum (now Liverpool Museum) and Central Library and their fine collections were also badly damaged. Houses, churches, hospitals, factories and other buildings were bombed throughout the city and its suburbs. Many roads, railways and tramlines were made unusable. While vital services were quickly restored, other damage often took years to repair. The bombing of Merseyside reached its peak in the seven-night blitz of 1-7 May 1941. This was the most intense series of air attacks on any British city area outside London during the war. The May Blitz on Merseyside was one of the last series of big raids on Britain before the German invasion of Russia. ...read more.

It marks the communal grave of 554 victims, of whom 373 were unidentified. An inscription was added to the cenotaph memorial for the First World War. A specific memorial was unveiled in St Nicholas's Churchyard in 2000. St Luke's Church the 'bombed out church' on Renshaw Street, was not rebuilt and remains today a memorial to the Liverpool Blitz. Liverpool was left with huge areas of docks and homes shattered. The rebuilding was to take years. Some well-known buildings were never rebuilt, such as the Customs House, which occupied the site of Chavasse Park. As early as 1941, the City Council considered how to restore the city centre. The first proposals come into sight that year, together with the plan for an inner ring road. The Labour Government set about establishing a new society. People were strong-minded never to return to pre-war unemployment. The war had equipped people for more state control and the government nationalized many industries. New laws for education, social services and housing shaped the welfare state. In 1946, Parliament set up the National Health Service. For the first time people had a right to free medical care. Employers laid off workers once existing contracts had been completed. Liverpool was still a thriving port but the city and the country as a whole were crippled by the cost of the war. Germany surrendered on 8 May 1945, when the Allied forces closed in on Germany from the east and west. The government declared VE day for Victory in Europe. People planned street parties for the children and shared rations to make cakes and jellies. They decorated the streets with flags and bunting. In July, there was a general election. Churchill was beaten and Labour won by a landslide. Japan surrendered on 2 September after the Allies dropped two atomic bombs on Japanese cities. VJ Day marked the end of the war. After years of anxiety, hardship and sacrifice people knew that they were finally safe. Service men and women began to come home. Aniice Arnasalam - 1 - ...read more.