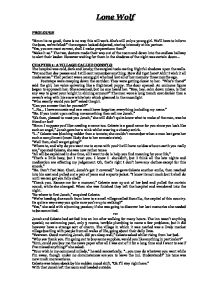 Lone Wolf. He reached into a pocket. BANG! Goraz the ape man had been struck! Jonah blew the smoke from the barrel of his golden revolver. Dont say I didnt warn you, he said smugly.

Lone Wolf PROLOUGE "Hmm its no good, there is no way this will work. She's still only a young girl. We'll have to inform the boss, we've failed!" the surgeon looked dejected, staring intensely at his partner. "Yes, you are most correct, shall I make preparations then?" "Make it so." The two, doctors made their way out of the room and down into the endless hallway to alert their leader. However waiting for them in the shadows of the night was certain doom... CHAPTER 1: A VILLAGE CALLED DONN'LO The hospital was cold, dark and lonely; the surgical tools casting frightful shadows upon the walls. "Yet another day passes and I still cant remember anything. How did I get here? Ahh! I wish it all made sense." That patient was a young girl who had lost all of her memory three months ago. Footsteps were creeping down the corridor. They were getting closer to her. "Who's there?" said the girl, her voice quivering like a frightened puppy. The door opened. An ominous figure began to approach her. She screamed, but no one heard her. "Hey, hey, calm down missy, is that any way to greet your knight in shining armour?" The man wore a long trench coat darker than a raven's wing with his snow white hair which gleamed in the moonlight "Who exactly would you be?" asked the girl. "Can you answer that for yourself?" "...No... I have amnesia and as a result have forgotten everything including my name." "Ha. If you insist upon calling me something then call me Jonah." "Ok then, pleased to meet you Jonah," she still didn't quite know what to make of the man, was he friend or foe? "Hmm I suppose you'll be needing a name too. Celeste is a good name for you since you look like such an angel," Jonah gave her a wink whilst wearing a cheeky smirk. ...read more.

It stood there taunting her, laughing as she moved into the distance. "Hmm I'd say we still have maybe a week or so before the Lycan virus fully infects her system, we need to hurry Jonah! Take her to see Casper in Spira he may offer more insight into the matter. Now go! Gods speed!" CHAPTER 2: The Beast Within The howling winds blew violently, tossing leaves up into the air, whirling round and round. The sun laid low in the sky, welcoming the coming night. Jonah and Celeste had been travelling north towards the glacial city of Spira. "How much further Jonah? We've been walking for hours, in silence I might say, it wouldn't kill you to talk you know," Celeste was looking very crestfallen. "Ok, ok. I'm sorry, I'll make it up to you. How about we rest for the night in that cavern in those hills, not exactly five star luxury but it'll do for now," he stared deep into Celeste's eyes, she began to blush. "Thank you. I appreciate it," They both walked towards the ominous looking cave; although it looked threatening, it was better than being in the freezing wilderness surrounded by ferocious beasts and dark shadows which consumed the land. The interior of the cave was damp and dingy, horrible and smelt putrid like rotten meat. "Ugh what is that god awful stench!?" "Ha. That's the great outdoors, ain't it grand?" Jonah said sarcastically. "Humph. I don't need your stupid jokes ok. Ive got enough to deal with as it is, so just leave me alone!" Celeste was getting very passionate, almost in tears. "Relax, get some rest and we'll sort it out later, alright?" He reached over and put his hand on her shoulder. "Go away! Since I met you my life has gotten worse! I was happy in the hospital and then you come and take me away, I should never have come with you! ...read more.

Judas laughed loudly and gave chase down the street, periodically strafing side to side as to avoid Jonah's devastating gunfire, however the blade toting assassin was far too quick for Jonah to hit. Judas dashed towards him attempting to strike but Jonah dodged escaping with nothing more than a scratch. "d**n, the only way I can win this is to use 'that bullet' though I'd rather not after all it may drag in all of these innocents" he thought to himself; his personality back to his caring persona. "No, I think its time I stopped playing dirty and fought like a man. You hear me Judas!? You've forced me to draw my sword, I hope you have made final peace with the world because this spells the end of you!" Jonah stood up from where he was hiding, and dropped his revolver; it landed with a thud dispersing a small amount of the earth around it. He walked over to where his coat had fallen, now dirtied with dust. Once dusting it off, Jonah removed from the pocket a small object which appeared to be the grip of a sword; it was of course missing a blade. "Jonah you intend to fight me in a duel without a blade? You've gone crazy old frien-" before he could finish out from the handle shone a brilliant light in the form of a blade, a heavenly glow. "Penitentia. A fitting name for my weapon. The sword of heaven in the hands of a devil, ironic don't you think?" he took a step forward then proceeded to walk right up to Judas. "Goodbye," Jonah drove the divine blade through his foe's chest before he even had time to blink. Judas' body began to break up, dissolve almost, disappearing into the air. "Judgement has been passed. I only hope your soul find peace, you're free of this whole sordid affair now, unfortunately I must continue on. I cannot die until I save that young girl..." Judas closed his eyes and vanished, a small tear fell. ...read more.