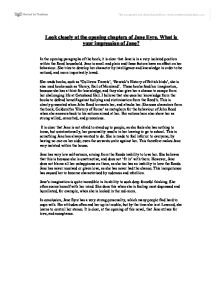 Look closely at the opening chapters of Jane Eyre. What is your impression of Jane?

Look closely at the opening chapters of Jane Eyre. What is your impression of Jane? In the opening paragraphs of the book, it is clear that Jane is in a very isolated position within the Reed household. Jane is small and plain and these factors have an effect on her behaviour. She tries to develop her character by intelligence and knowledge in order to be noticed, and more importantly loved. She reads books, such as "Gullivers Travels', 'Bewick's History of British birds', she is also read books such as 'Henry, Earl of Moreland'. ...read more.

She uses characters from the book, Goldsmiths 'History of Rome' as metaphors for the behaviour of John Reed when she answers back to his actions aimed at her. Her actions here also show her as strong willed, conceited, and precocious. It is clear that Jane is not afraid to stand up to people, as she feels she has nothing to loose, but unintentionally, her personality results in her leaving to go to school. This is something Jane has always wanted to do. ...read more.

Jane has never received or given love, as she has never had the chance. This inexperience has caused her to become characterised by rudeness and rebellion. Jane's imagination is quite incredible in its ability to such deep forceful thinking. She often scares herself with her mind. She does this when she is feeling most depressed and humiliated, for example, when she is locked in the red-room. In conclusion, Jane Eyre has a very strong personality, which many people find hard to cope with. Her attitudes often end her up in trouble, but by the time she is at Lowood, she learns to control her stance. It is clear, at the opening of this novel, that Jane strives for love, and acceptance. ...read more.