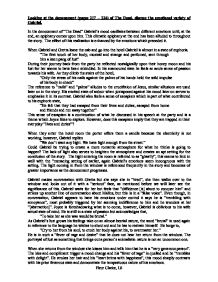 Looking at the denouement of The Dead, discuss the emotional variety of Gabriel.

Looking at the denouement (pages 217 - 224) of The Dead, discuss the emotional variety of Gabriel. In the denouement of "The Dead" Gabriel's mood oscillates between different emotions until, at the end, an epiphany comes upon him. This climatic epiphany at the end has been alluded to throughout the story. The effect of this realisation is enhanced by the emotions which preceded it. When Gabriel and Gretta leave the cab and go into the hotel Gabriel is almost in a state of euphoria. "The first touch of her body, musical and strange and perfumed, sent through him a keen pang of lust" During their journey back from the party he reflected nostalgically upon their honey moon and his lust for her seems to have been rekindled. In his enamoured state he feels an acute sense of passion towards his wife. As they climb the stairs of the hotel, "Only the stress of his nails against the palms of his hands held the wild impulse of his body in check" The reference to "nails" and "palms" alludes to the crucifixion of Jesus, similar allusions are used later on in the story. His excited state of ardour when juxtaposed against his mood later on serves to emphasise it in its contrast. ...read more.

His "smiling" question of earlier has turned into a "cold" question, heat was used earlier in the story as a symbol for their passion, this symbol has now been subverted in place of his attempt at indifference. Gretta's eyes make Gabriel feel "awkward", he possibly has an idea of what is to come. Before Gretta tells him that Michael is dead she looks "away from him" and "along the shaft of light towards the window", the window is appearing again and could be linked with the memory of Michael Furey. Gabriel's response to Gretta saying that Michael is dead is a sense of "[humiliation]" as he realises that whilst he has been preoccupied by memories full of "joy and desire" she had been "comparing him in her mind with another". In light of this "shameful consciousness" of himself his image of himself changes, in the mirror he sees himself as "ludicrous" and "pitiable" and accuses himself of "idealising his own clownish lusts". As mentioned before this shows the effect Michael Furey has had on him and one of the main themes of this story is how the dead affect the living beyond the grave. ...read more.

Gabriel's soul "[swoons]" as he hears it falling "like the descent of their last end, upon all the living and the dead", he now feels the effect that the dead have upon the living. These final thoughts could suggest that the living might, in fact, be able to escape and live unfettered by the past, because surely snow can't last forever? Gabriel's emotions at the beginning were fervent and filled with anger and passion, they fluctuate as the evening progresses and these fluctuations are triggered by Gretta's mood and response to him and thus, in effect, by Michael Furey. By the end of the story Gabriel is no longer angry but feels a keen sense of self awareness triggered by Gretta's revelation that Michael Furey died for her. The setting of the story against the backdrop of winter which, in literary tradition is a symbol for death, is entirely appropriate given the nature of Gabriel's epiphany. Joyce exhibits how, beyond the grave, the dead can still have an effect on the living. In his speech at the party Gabriel says, of the dead, "Were we to brood upon them always we could not find the heart to go on," Will he ever manage to escape the death of Michael Furey? ?? ?? ?? ?? Fleur Clarke, L6 ...read more.