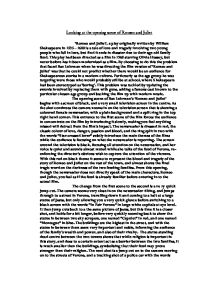 Looking at the opening scene of Romeo and Juliet

Looking at the opening scene of Romeo and Juliet 'Romeo and Juliet', a play originally written by William Shakespeare in 1595 - 1600 is a tale of love and tragedy involving two young people who fall in love, but find it ends in disaster due to their age old family feud. This play had been directed as a film in 1968 starring Olivia Hussey, but never before has it been modernised as a film. By choosing to do this the problem that faced Baz Luhrman when he was directing the film version of 'Romeo and Juliet' was that he could not predict whether there would be an audience for Shakespearean stories in a modern culture. Particuarly as the age group he was targeting were those who would probably still be at school, where Shakespeare had been stereotyped as 'boring'. This problem was tackled by updating the swords involved by replacing them with guns, adding a famous cast known to the particular chosen age group and backing the film up with modern music. The opening scene of Baz Luhrman's 'Romeo and Juliet' begins with a screen of black, and a very small television screen in the centre. As the shot continues the camera zooms in on the television screen that is showing a coloured female newsreader, with a plain background and a split ring in the top right hand corner. ...read more.

The music up to this point has been very loud and 'menacing', increasing in volume when what I see as 'relevant shots' are held. The lighting has been bright throughout, all shots set in the day, and there have been no characters introduced until the family tree. The beginning shots seem to be more introducing the place and the themes than the characters themselves. The layout of this tree implies that the rivalry started between these two men and has been passed down through the family. With the statue of Jesus with open arms set between the two families reminds us of the strong religion present in the city, and the grey colour of the pictures and background sets in almost like a cloud of grey, strongly contrasting with the colour we have seen in the previous scenes. As well as being the first shot of the characters, also introduced in this scene is the first voice since the newsreader, although this time it is non diagetic, in the form of a voice over. The music reaches a climax and then fades away to a quiet backing for the deep male voice commenting on the family trees in front of us. The shots of this 'tree' are broken up by shots of fire and newspapers titled "Montague vs Capulet", and while the speed of the changing shots has slowed down, now dissolving in to each other, Luhrman ...read more.

This is followed by shots of fireworks, choirboys singing high piercing notes almost as a climax, guns shooting showing violence, main characters and eventually finishes on a black screen with "William Shakespeare's Romeo and Juliet". This creates a point of high climax, quickly let down by the still almost 'dead' screen in comparison to previous shots. The mention of William Shakespeare is the first we hear of the author, and in mentioning him Luhrman has made himself seem almost modest, discarding any impression made implying that it is Luhrman's own play. The title then moves off the screen to the left and the film begins. As an opening sequence for this particular film I find it very effective. The setting of such a film in modern day would have proved very difficult, but the replacement of swords by guns has a huge impact on its success. The violence is portrayed well and you learn just about enough to follow the film as it opens but not enough to know what happens between now and the death of the characters. I like the way Luhrman lets the audience know the resulting death of the characters, but he does not say who dies. This builds up an immense suspense throughout the film. This introduction is done in such a way that it will captivate almost everyone's attention through moving so quickly and creating such a tense atmosphere. ...read more.