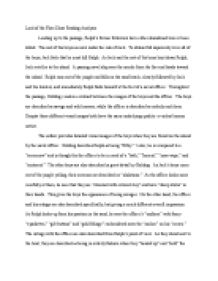 ﻿Lord of the Flies Close Reading Analysis Leading up to the passage, Ralph?s former followers have either abandoned him or been killed. The rest of the boys are now under the rule of Jack. To obtain full superiority over all of the boys, Jack feels that he must kill Ralph. As Jack and the rest of the boys hunt down Ralph, Jack sets fire to the island. A passing naval ship sees the smoke from the fire and heads toward the island. Ralph runs out of the jungle and falls on the sand beach, closely followed by Jack and the hunters, and immediately Ralph finds himself at the feet of a naval officer. Throughout the passage, Golding creates a contrast between the images of the boys and the officer. The boys are described as savage and wild messes, while the officer is described as orderly and clean. Despite these different visual images both have the same underlying quality: a violent human nature. The author provides detailed visual images of the boys when they are found on the island by the naval officer. ...read more.

In the passage the reader is given the feeling that the island is a microcosm of the world. The island is described to be a place where ?war? and conflict take place when the officer asks what they have been doing. This is similar to the outside world because it too is experiencing a great world war. This is shown from the officer?s ?cutter,? and his rating?s ?sub-machine gun.? In general, the passage exemplifies that both societies have conflict and, in this case, ?war.? When the officer asks Ralph if there are ?adults? with them or any ?grownups? on the island Ralph responds by shaking his head no. This exchange represents that both societies feel that adults are the proper authority figures. The fact that he asks this shows that outside of the island adults are also thought of as being in the position of control. From the moment he is noticed on the island, the officer is given full respect and appreciation by the boys. From the beginning of the passage, the author employs irony to give a deeper meaning. ...read more.

Later on, he asks if anyone has died and is shocked when Ralph replies ?only two.? This too is ironic because the officer, who is in the midst of a war with many more deaths, is ashamed of the boys who, by comparison, have killed less. Although the boys, the naval crew, and their officer are described by very different images, their human nature is very much alike. That is, that they are both susceptible to using war to solve their disputed conflicts. The ironic piece of this being that the officer feels he is superior to the boys because of his appearance and, what is described to be, his civilized manner. The imagery that Golding gives him that makes him appear this way, truly acts as a mask covering up his fundamental human nature. When it comes down to it, the officer is certainly as savage as the other boys with his aggressive nature during times of war. In addition, not only are the boys and the officer similar through human nature, their bot societies are parallel through war. Therefore, showing that the island is a microcosm of the greater outside world. ...read more.