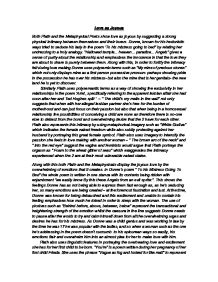 Love as Joyous Both Plath and the Metaphysical Poets show love as joyous by suggesting a strong physical intimacy between themselves and their lovers. Donne, known for his hedonistic ways tried to seduce his lady in the poem 'To his mistress going to bed" by relating her undressing to a holy analogy. "Hallowed temple... heaven... paradise... Angels" gives a sense of purity about the relationship and emphasises the innocence in that the love they are about to share is purely between them. Along with this, in order to fortify the intimacy felt during love making Donne uses polysemic terms such as "My mine of precious stones" which not only displays mine as a first person possessive pronoun- perhaps showing pride in the possession he has over his mistress- but also the mine that is her genitals- the new land he is yet to discover. Similarly Plath uses polysemantic terms as a way of showing the exclusivity in her relationships in the poem 'Ariel , specifically referring to the apparent lesbian ...read more.

At the time, Donne was known for being debauched and this excitement and unable to contain his feeling emphasises how much he risked in order to sleep with the woman. The use of plosives such as "Behind before, above, between, below" represent the transactional and heightening strength of the emotion whilst the caesura in the line suggests Donne needs to pause after the words to try and calm himself down from all the overwhelming urges and desires he has for his mistress. As Donne was a child genius and was working in law by the time he was 17 he was popular with the ladies, and so when a woman such as the one he's addressing in the poem doesn't succumb to his epicurean ways so easily, his emotions flair and overwhelm him into an almost plea for her to make love with him. Plath also uses linguistic features in portraying the overbearing love and excitement she has for her first child to be born. ...read more.

Whether Donne actually meant to marry the woman is questionable, after his strong womanising reputation however if he is then the new start he would have in actually committing himself in a marriage shows the strength of the love he feels. Plath, in "Ariel" sees the birth of her first child as a new start for herself. The metaphor of the last 2 lines "Right, like a well-done sum. A clean slate, with your own face on" shows the positivity she already sees in this new being "well-done sum" and "clean slate". At the time she was going through hardships in her marriage with Ted Hughes and so the new child could be a source for a new start of optimistic love and a positive source to project happiness onto. The compound words in "Thumbs-down on the dodo's mode." Represents the new life and thus new beginning Plath will receive from the new baby whilst the assonance of the 'o' sound fortifies this by showing certainty and stability she sees in that this undoubtedly will give her the release and new start that she's needed for so long ...read more.