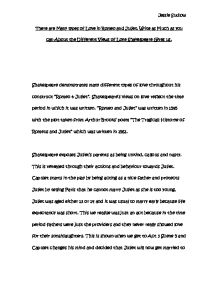 Love in Romeo and Juliet

There are Many types of Love in Romeo and Juliet. Write as Much as you can About the Different Views of Love Shakespeare Gives us. Shakespeare demonstrates many different types of love throughout his construct "Romeo & Juliet". Shakespeare's views on love reflect the time period in which it was written. "Romeo and Juliet" was written in 1595 with the plot taken from Arthur Brooks' poem "The Tragicall Historye of Romeus and Juliet" which was written in 1562. Shakespeare exposes Juliet's parents as being unkind, callous and nasty. This is revealed through their actions and behaviour towards Juliet. Capulet starts in the play by being acting as a nice father and protects Juliet by telling Paris that he cannot marry Juliet as she is too young, Juliet was aged either 13 or 14 and it was usual to marry early because life expectancy was short. This we realise was just an act because in the time period fathers were just the providers and they never really showed love for their sons/daughters. This is shown when we get to Act 3 Scene 5 and Capulet changes his mind and decided that Juliet will now get married to Paris. ...read more.

The Nurse loves Juliet by helping her find Romeo, her true love, and she helps organise their wedding. She also comes up with ways to sneak Juliet out or Romeo in. By doing this, she betrayed Capulet and Lady Capulet who had no idea what she was up to. This is because The Nurse and Juliet have a greater and closer relationship then Juliet and Lady Capulet because The Nurse brought Juliet up as her own. "When it did taste the wormwood on the nipple of my dug and felt it bitter" this implies that the Nurse had to breast feed and wean Juliet because Lady Capulet refused to do it. Since the Nurse brought Juliet up her own mother feels uncomfortable in a room with Juliet unless the Nurse is there. This is shown in Act 1 Scene 3 when she says she would like a private word with Juliet and calls the Nurse straight back into the room. This is mainly due to the fact that parental relation ships with children aren't as strong as they are now. Therefore this would be why Juliet would tell the Nurse about her love for Romeo because she respects her more than her mother as the Nurse gives her more motherly love. ...read more.

Paris is saying this as it is almost having a dig at Capulet because Lady Capulet would have been around Juliet's age when she had Juliet. He also get quite excited when he hears that Juliet will marry him and when she turns up at Friar Lawrence's cell he starts calling her "my lady and my wife" but Juliet won't have any of it. She refuses to answer his questions and wishes to not really spend time with him as she knows that she isn't going to marry him because she will do anything to get out of that marriage. This was due to the fact that Juliet was too modern to survive in a late medieval society as she did not want to be bound by the rules and did not like being told what she had to by everyone. She would have rather lived by her own rules and make her own decisions. The love shown through each character represents their personality and several people might have not wanted others to be happy in love or find their own love. This may have been forced into a marriage or are still alone but they resent others finding their own happiness. ?? ?? ?? ?? Jessie Sudlow ...read more.