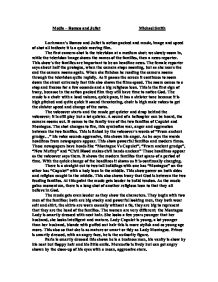 Lurhmann's Romeo and Juliet is action packed and music, image and speed of shot all indicate it is a quick moving film.

Media - Romeo and Juliet Michael Smith Lurhmann's Romeo and Juliet is action packed and music, image and speed of shot all indicate it is a quick moving film. The first camera-shot is the television at a medium shot; we slowly zoom in, while the television image shows the names of the families, then a news reporter. This show's the families are important to be on headline news. The female reporter says about half the prologue, when the camera stops zooming, but as she nears the end the camera zooms again. When she finishes he reading the camera zooms through the television quite rapidly. As it passes the screen it continues to zoom down the street extremely fast this also shows the films speed. The zoom comes to a stop and freezes for a few seconds and a big religious icon. This is the first sign of irony, because in the action packed film they still have time to notice God. The music is a choir with a loud volume, quick pace, it has a sinister tone because it is high pitched and quite quick it sound threatening, choir is high male voices to get the sinister speed and change of the notes. ...read more.

This also so that she is as mature or smart or tidy as Lady Montague. Prince is smartly dressed, with an angry face, he is the authority figure. Paris is smartly dressed this shows he is a business man, his vanity is show by his neat but floppy hair and his little smile. Mercustio is lively but can get angry shown by the close-up of his eyes with a mean, aggressive stare. There is a straight cut as the music gets louder and a series of fast cut images, mainly about violence and hatred between the families. The music climaxes then blends into a more drum beat. As a medium shot of a group of men, labeled "the Boys" The men are acting immature and acting like boys, by shouting and being a nuisance. There clothes are Hawaii shirts with the buttons undone which exposes there skinny bodies. This shows they are rude and obnoxious but are wimps if they were in a fight. A low shot is taken of the yellow car to stand out. A point of view shot of Benvolio goes off. The Capulet car arrives we get a low angle shot of the car coming towards us, this is to show they are threatening. ...read more.

Because the music is slow and if flows nicely with the text which is an old style italic font, this suggests that the film is set in along time ago as well as the music. We get a high-angle camera shot at the beginning which pans across the town smoothly and calmly like the music and the voiceover. The camera angle shows us a medieval town. The shot shows a river flowing in the middle of the town and all the colours are pastel and flow. The camera turns up and zooms slowly at the sun, it stops and it the big italic writing saying "William Shakespeare" as though his is the best. Straight cut to town's court medium height angle, in the background a horse and cart can be seen this shows the period of time. There is a straight cut to the Montague boys feet, kicking a dog, this show them acting badly and causing trouble. There is a long shot on the Capulets they are dressed smartly and also polite. They wear darker coloured clothes to stand out. The Montague boys are dressed in bright clothes and stand out as well but they are rude. There is a straight cut to the Montague biting his thumb which is a close up, then a close-up on the people talking. Straight cut to towns people noticing trouble, then back to a medium shot of the Montague boys. ...read more.