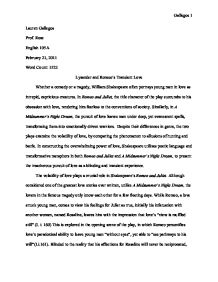 Lysander and Romeos Transient Love. Shakespeare utilizes poetic language and transformative metaphors in both Romeo and Juliet and A Midsummers Night Dream, to present the treacherous pursuit of love as a blinding and transient experience

Lauren Gallegos Prof. Rose English 105A February 21, 2011 Word Count: 1522 Lysander and Romeo's Transient Love Whether a comedy or a tragedy, William Shakespeare often portrays young men in love as intrepid, capricious creatures. In Romeo and Juliet, the title character of the play succumbs to his obsession with love, rendering him fearless to the conventions of society. Similarly, in A Midsummer's Night Dream, the pursuit of love leaves men under deep, yet evanescent spells, transforming them into emotionally driven warriors. Despite their differences in genre, the two plays examine the volatility of love, by comparing the phenomenon to allusions of hunting and battle. In constructing the overwhelming power of love, Shakespeare utilizes poetic language and transformative metaphors in both Romeo and Juliet and A Midsummer's Night Dream, to present the treacherous pursuit of love as a blinding and transient experience. The volatility of love plays a crucial role in Shakespeare's Romeo and Juliet. Although considered one of the greatest love stories ever written, unlike A Midsummer's Night Dream, the lovers in the famous tragedy only know each other for a few fleeting days. While Romeo, a love struck young man, comes to view his feelings for Juliet as true, initially his infatuation with another women, named Rosaline, leaves him with the impression that love's "view is muffled still" (I. ...read more.

Romeo only further promotes this metaphorical war between the two ladies by ordering his "fair sun, to kill the envious moon" in order to facilitate their love (II.ii.4). By creating a metaphorical battle between Rosaline, and Juliet, Romeo transforms his old love for Rosaline into a obstacle he must overcome to validate his love for Juliet. By paralleling the act of love so closely to acts of violence, Shakespeare portrays love as a volatile yet powerful force. To emphasize the similarities between the pursuit of love to the act of war, Shakespeare utilizes violent language to transform the love affair between Romeo and Juliet into a volatile battle of survival. This portrayal of love is explored heavily in the infamous balcony scene of the play. Blinded to the inevitable consequences, in this powerful scene the two lovers fight against the conventions of reality. Like a warrior "with love's light winds", Romeo breaks through the "O'erperch walls " of his enemy, irrationally declaring that Juliet's love has made him "proof against their enmity" (II. ii. 65-67). Ignorant to the penalties his actions could bring by trespassing on his enemies property and vowing to elope with out permission, it is apparent that Romeo holds love higher than his own life. Believing his life were better ended by hate/Than death prorogu�d, wanting" Juliet's love, Romeo not only shies away from reality but he comes to view that the pursuit of love is a life or death fight, similar to act of war (II.ii.77-78). ...read more.

Before his descent into the forest where his affections for Hermia will be tested, Lysander clearly recognizes that lovers face a million obstacles and can be quickly separated by "war, death, or sickness" (I.iv. 24). Knowing that love can be volatile and often short lived, Lysander portrays the effects of love as "momentary as sound,/ Swift as a showdown, Short as any dream;/ Brief as the lighting collided in the light", so quick and in nature that "darkness do devour it up"(I.iv.25-30). However, Lysander ability to recognize the transience of love is what allows him to escape the same tragic end that befell on Romeo. The volatility of love, in A Midsummer's Night Dream is transformed and portrayed as humorous phenomenon, rather then a life ending power. Although Romeo and Lysander hold overwhelming similarities in the pursuit of love, their respective plays embody two very different genres. While A Midsummer's Night Dream features a tragic beginning, the final scene sticks to the classic comedic ending, with a final image of a valient young lover and his prosperous love. Romeo and Juliet on the other hand is a model tragedy, emphasizing loves power to bring "violent ends". Both Romeo and Lysander symbolize the figure of the hopeless romantic who is blinded to the consequences of chasing after forbidden love. However by the end of the play Lysander breaks free of the blinding and transient effects of love, and sustains, while Romeo succumbs to the destructive effects. ?? ?? ?? ?? Gallegos 1 ...read more.