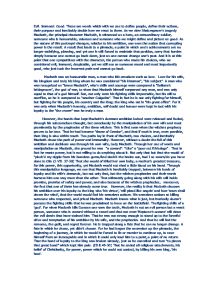 Macbeth as a fallen hero. Two paths lay in front of Macbeth, two choices, and inevitably Macbeth chose the path of power and immorality.

Evil. Immoral. Good. These are words which with we use to define people, define their actions, their purpose and inevitably decide how we react to them. As we view Shakespeare's tragedy Macbeth, the principal character Macbeth, is witnessed as a hero, an extraordinary soldier, someone who is honourable, valorous and someone who we might define and picture as good. As the nature of this portrayal changes, relative to his ambition, one sees the notion that corrupting power is the result. A result that leads to a pinnacle, a point in which one's achievements are no longer satisfying, pleasing, and yet one is still forced to maintain that position, carry that burden simply because one cannot go back down, just as one cannot change one's past. And it is at this point that one sympathizes with the character, the person who made his choices, who we considered evil, immoral, despicable, yet we still see as someone moral and most importantly good, who just took the incorrect path and cannot go back. Macbeth was an honourable man, a man who felt emotions such as love. Love for his wife, his kingdom and truly his king whom he was considered "his kinsman", "his subject". ...read more.

That he was not strong enough to stand up to the forceful drive and temptation of his ambition by his wife, and the prophecies. And that he will feel the remorse, the guilt, and regret forever. He is trapped along a fate that he can no longer change. A fate in which he chose, yet didn't choose. For he had begun the ascension up the pinnacle, the beginning of a journey, in which he would be forced to lie or murder to continue up, to save himself from an inescapable end in which it could only lead him to a point, a point of no return. That the bond of loyalty to the king was broken already, just as he cancelled and tore "to pieces that great bond" which kept him pale. (III.ii.49-50) That he ended all religious attachments, his belief of Christianity, for power, power which he could not control, by killing his own king, 'his host'. Macbeth was a mortal, someone who knew his mistake, that his hidden ambition had been released. That if he "Had...but died an hour before this chance,/" he would of "lived a blessed time"(II.iii 87-88). That he was condemned, doomed when he struck that fatal blow on King Duncan. ...read more.

That the root cause, his ambition, his will to believe in falseness lies, and his cowardness to negate it led to his change in his morals, into unrest and immorality. And that all of it led him to a point, a peak where he spent all the effort to attain something that he did not deserve, just as a "a giant's robe upon a dwarfish thief", and that eventually one's strength to uphold that great weight cannot last, even if you are a god. (V.II. 21-22) And it is here that we sympathize with Macbeth, a man who killed people, murdered them with or without intent, yet was led down this idea, this path simply by one wrong choice which led to another just as a butterfly flies from one flower to another. He was a villain, he was immoral, but that in itself is mankind's faults, which we all understand, that we all make mistakes, that we are led down paths in which we chose not too, and that Macbeth just went down a path which had no end. For it was this prominent downfall which without a doubt showed us that if someone recognized as a hero, a god can be deduced to such evil deeds, we can only sympathize with him, see ourselves as more vunerable, easier to manipulate, and just like himself. ...read more.