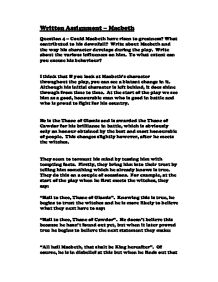 Macbeth - Could Macbeth have risen to greatness? What contributed to his downfall? Write about Macbeth and the way his character develops during the play. Write about the various influences on him. To what extent can you excuse his behaviour?

Written Assignment - Macbeth Question 4 - Could Macbeth have risen to greatness? What contributed to his downfall? Write about Macbeth and the way his character develops during the play. Write about the various influences on him. To what extent can you excuse his behaviour? I think that if you look at Macbeth's character throughout the play, you can see a blatant change in it. Although his initial character is left behind, it does shine through from time to time. At the start of the play we see him as a good, honourable man who is good in battle and who is proud to fight for his country. He is the Thane of Glamis and is awarded the Thane of Cawdor for his brilliance in battle, which is obviously only an honour obtained by the best and most honourable of people. This changes slightly however, after he meets the witches. They seem to torment his mind by teasing him with tempting facts. Firstly, they bring him into their trust by telling him something which he already knows is true. They do this on a couple of occasions. For example, at the start of the play when he first meets the witches, they say: "Hail to thee, Thane of Glamis". ...read more.

Come let me clutch thee. I have thee not, but I see thee still. Art thou not, fatal vision, sensible to feeling as to sight? Or art thou but a dagger of the mind, a false creation, proceeding from the heat-oppressed brain?" This is the first obvious sign that he is fearful and disturbed, very unlike his original character. The next VERY obvious sign is when he returns from Duncan's chamber after killing him, distraught, confused, and extremely fearful: "There's one did laugh in's sleep, and one cried 'Murder!' That they did awake each other, I stood and heard them. But they did say their prayers, and addressed them again to sleep. One cried 'God bless us!' and 'Amen!' the other, as they had seen me with these hangman's hands. Listening their fear, I could not say 'Amen', when they did say 'God bless us!' But wherefore could I not pronounce 'Amen'?" This shows clearly that he is extremely disturbed by what he has done and that and every little thing he heard, he saw as a threat to him and he became paranoid that he had been seen. He is shaky, scared, anxious and nervous. All of these sides of Macbeth that we have never seen before. ...read more.

When he finds this out, he refuses to fight Macduff. Macduff however says: "Then yield thee coward, and live to be the show and gaze o' th' time. We'll have thee, as our rarer monsters are, painted upon a pole and underwrit, 'Here may you see the tyrant.' Macbeth no returns to the beginning and for a brief moment becomes the brave Macbeth we all know: "I will not yield, to kiss the ground before young Malcolm's feet, and to be baited with the rabble's curse. Though Birnam wood come to Dunsinane, and thou opposed, being of no woman born, yet I will try the last. Before my body, I throw my warlike shield. Lay on Macduff, and damned to him that cries 'Hold, enough!' So, even with the odds stacked against him, at the end of the play Macbeth ironically returns to the heroism seen at the start. Macduff kills him. I think that Macbeth could have risen to greatness, but he didn't because of the way the witches fooled him and also because of his wife's influence in that she persuaded him to kill Duncan. So, in a way, his behaviour is excusable, but only and insecure and weak person would allow himself to be fooled by evil into doing evil. Damien Hendry 4H ...read more.