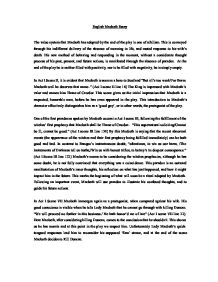 Macbeth. The value system that Macbeth has adopted by the end of the play is one of nihilism. This is conveyed through his indifferent delivery of the absence of meaning in life, and muted response to his wifes death.

English Macbeth Essay The value system that Macbeth has adopted by the end of the play is one of nihilism. This is conveyed through his indifferent delivery of the absence of meaning in life, and muted response to his wife's death. His new method of behaving and responding in the moment, without a considerate thought process of his past, present, and future actions, is manifested through the absence of paradox. At the end of the play he is neither filled with positivity, nor is he filled with negativity, he is simply empty. In Act I Scene II, it is evident that Macbeth is seen as a hero to Scotland "But all's too weak/For Brave Macbeth-well he deserves that name-." (Act I scene II line 16) The King is impressed with Macbeth's valor and names him Thane of Cawdor. This scene gives us the initial impression that Macbeth is a respected, honorable man, before he has even appeared in the play. ...read more.

This marks the beginning of what will soon be a ritual adopted by Macbeth. Following an important event, Macbeth will use paradox to illustrate his confused thoughts, and to guide his future actions. In Act I Scene VII Macbeth immerges again as a protagonist, when compared against his wife. His good conscience is visible when he tells Lady Macbeth that he cannot go through with killing Duncan. "We will proceed no further in this business./ He hath honor'd me of late" (Act I scene VII line 32). Here Macbeth, after considering killing Duncan, comes to the conclusion that he shouldn't. This shows us he has morals and at this point in the play we respect him. Unfortunately Lady Macbeth's quick-tongued responses lead him to reconsider his supposed 'firm' stance, and at the end of the scene Macbeth decides to Kill Duncan. Act II scene II follows directly after the murder of Duncan, and Macbeth experiences great internal conflict. "I am afraid to think what I have done;/Look on't again I dare not." ...read more.

(Act III, scene I) Macbeth is saying that to be king is of no importance unless he is safe. This statement depicts his ambition, and greed, but also his paranoia. Macbeth's next goal is to annihilate Banquo, this highlights his betrayal and distrust towards Banquo, his once respected friend, amplifying Macbeth's dramatic change in character from the beginning of the play until this scene. "Both of you know/Banquo was your enemy" (Act III scene I line 117) Macbeth's cruelty is underlined as he speaks to the murderers he has hired to kill Banquo. Conclusion notes: * His dialectical processes have reached their conclusion. * The use of paradox has been indicative of Macbeth's reflection and evaluation throughout the play. Shakespeare has implemented them to predict and produce change. * We all die in the end....time is essentially worthless---> death * 'full of sound and fury/signifying nothing" * sees life as a short, minimal impact existence. Simply illusion has no real significance-'actor worrying about his time on stage (quote)' * calls attention to acting/reality conspiracy-his nihilism here affects/reflects upon not only macbeth but the whole entire play... ...read more.