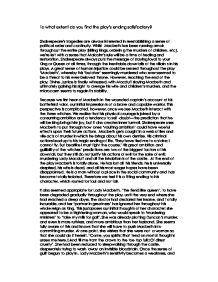 Macbeth. To what extent do you find the plays ending satisfactory?

To what extent do you find the play’s ending satisfactory?

Shakespeare's tragedies are always interested in reestablishing a sense of political order and continuity. Whilst Macbeth has been running amok throughout the entire play (killing kings, ordering the murders of children, etc), we're left with a sense that Malcolm's rule will be a time of healing and restoration. Shakespeare always puts the message of staying loyal to your King or Queen at all times, through the inevitable downfalls of the villains in his plays. A great sense of human injustice could be sensed throughout the play ‘Macbeth’, whereby this ‘butcher’ seemingly murdered who ever seemed to be a threat to his ever-beloved throne. However, reaching the end of the play, Divine Justice is finally witnessed, with Macduff slaying Macbeth and ultimately gaining his right to avenge his wife and children’s murders, and the microcosm seems to regain its stability.

Because we first hear of Macbeth in the wounded captain’s account of his battlefield valor, our initial impression is of a brave and capable warrior. This perspective is complicated, however, once we see Macbeth interact with the three witches. We realize that his physical courage is joined by a consuming ambition and a tendency to self-doubt—the prediction that he will be king brings him joy, but it also creates inner turmoil. Shakespeare uses Macbeth to put through how ones ‘vaulting ambition’ could have woeful effects upon their future actions. Macbeth gets caught in a web of lies and vile acts of murder in which he brings about his own demise. His criminal actions lead up to his tragic ending of life. 'They have tied me to a stake; I cannot fly, But bearlike I must fight the course.' His great ambition and gullibility of the witches’ predictions are two of the biggest factors of his downfall, but they still do not justify his actions of evil for the sake of evil; murdering Lady Macduff and all the inhabitants of the castle. At the end of the play Macbeth is totally alone. He has lost all his friends, he is universally despised, his wife is dead, and all his most eager hopes have been disappointed. He is a man without a place in the social community and has become totally isolated. Therefore we feel it is a fitting ending to his character, which routed for foul and not fair.

It also seemed appropiate for Lady Macbeth, ‘the fiend like queen’, to have been degraded gradually throughout the play, until the very end where she had reached a deep abyss. The doctor had declared her insane, and totally incurable, and her ‘partner in greatness’ has ignored her throughout his whole reign as King. This juxtaposes our initial thoughts of her character: she appeared to be a frightening woman, who would speak to ‘murdering ministers’ to ‘take my milk for gall’. She was already plotting Duncan’s murder, and even is more ruthless, and more ambitious than her husband. She seems fully aware of this and knows that she will have to push Macbeth into committing murder. At one point, she wishes that she were not a woman so that she could do it herself, ‘Come, you spirits That tend on mortal thoughts! unsex me here, And fill me from the crown to the toe top full Of direst cruelty’. She had been reduced to sleepwalking through the castle, desperately trying to wash away an invisible bloodstain. Once the sense of guilt begun to play in, Lady Macbeth’s sensitivity becomes a weakness, and she is unable to cope. Significantly, she (apparently) kills herself, signaling her total inability to deal with the legacy of their crimes.

Ultimately we believe that Malcolm will be a great King, after maturing during his time abroad. He is the leader of the rebelling army, ‘make all our trumpets speak! – give them all breath – those clamorous harbingers of blood and death’. The fact that Macduff states ‘Hail King of Scotland’ contrasts the time when the witches also announced this to Macbeth. Yet, this time it has been said by a loyal soldier, and not supernatural beings; said by fair and not foul. The setting is also important, as it is at a castle, and not a heath- civilization (law and order) and not disruption- also exposing fair and not foul. Another important factor is that of Malcolm being able to speak to God, ‘by the grace of grace’, something Macbeth could not achieve, ‘but wherefore I could not pronounce Amen’. Lastly the coronation at Scone shall not be one remembered for the mad outbursts of a distressed Macbeth, witnessing the ghost of Banquo, but one for the crowning of a loyal, God-given King. In conclusion, it is also satisfactory to have witnessed the fighting, manly, brave Macbeth before his death- ‘I’ll fight till from my bones my flesh be hacked’. He is the only tragic character in Shakespeare’s plays who does not contemplate suicide, ‘why should I play the Roman fool’ and this could be the only reason why we respect him; however, this is just a minor sense of respect, as he was a ‘butcher’.