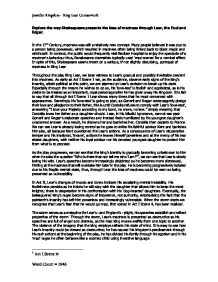 madness through king lear, the fool and edgar

Explore the way Shakespeare presents the idea of madness through Lear, the Fool and Edgar. In the 17th Century, madness was still a relatively new concept. Many people believed it was due to a person being possessed, which resulted in madness often being linked back to black magic and witchcraft. In context, the public would frequently visit Bedlam Hospital to enjoy the spectacle of a madman's behaviour thus, Renaissance dramatists typically used 'mad scenes' for a comical effect. In spite of this, Shakespeare seems intent on a serious, if not slightly disturbing, portrayal of madness in King Lear. Throughout the play King Lear, we bear witness to Lear's gradual and possibly inevitable descent into madness. As early as Act I Scene 1 we, as the audience, observe early signs of the king's insanity, albeit political at this point, we are alarmed at Lear's decision to break up his state. Especially through the means he wishes to do so, his 'love-test' is foolish and egotistical, as is his desire to be treated as an important, royal personage after he has given away his kingdom. It is fair to say that all through Act I Scene 1 Lear shows many times that he most concerned with appearances. Seemingly his 'love-test' is going to plan, as Goneril and Regan extravagantly pledge their love and allegiance to their father, this is until Cordelia refuses to comply with Lear's 'love-test', answering "I love your Majesty according to my bond, no more, no less." ...read more.

Lear's Fool is 'all-licensed' which essentially means that the Fool is licensed to say things to his superior that anybody else would be punished for. Taking this, and the fact that Lear and his Fool seem to have a very close relationship (the Fool calling Lear 'nuncle' and Lear calling the Fool 'boy'), throughout the time the Fool exists in the play he is able to counsel Lear. The Fool's sarcastic jesting is blunt and hard hitting. Almost as soon as the Fool enters in the play he harps on Lear's folly, this is apparent when the king asks 'Dost thou call me fool, boy?' to which the Fool replies 'All thy other titles thou hast given away; that thou wast born with'2. Through the Fool's madness he serves to push Lear towards the truth about his daughters this is evident when he warns Lear that Regan will side with Goneril, 'Shalt see thy other daughter will use kindly; for though she's as like this crabs like an apple, yet I can tell what I can tell''3. And again when he hints at the dangerous situation Lear has put himself in by reversing the natural order, making his daughters his mother, 'The hedge-sparrow fed the cuckoo so long that it had it head bit off by it young'4 - this is clearly warning the king that his daughters will turn against him. Furthermore, the Fool also tries to open the king's eyes so that he can see these truths on his own, 'Thou shouldst not have been old till thou hadst been wise'5, as well as have some insight as to why these events are occurring. ...read more.

Lear eventually gains the insight he needs to perceive his daughters and society for what it really is, insincere and immoral. The Fool's abrupt disappearance signifies that Lear has gained all the understanding he needs to distinguish between and reality. Therefore, the Fool is no longer needed: his purpose has been fulfilled. Unlike Edgar or the Fool, Lear's madness is not an imminent occurrence, it develops throughout the play. The insanity of the king is unequivocally ironic, in his apparent sanity he was introduced to be conceited and imprudent, yet when he is 'mad' he becomes a more humble, compassionate and attractive character. At the beginning of the play Lear acts exceptionally irrational and cannot see the verity of his superficial values but as a result of his 'madness' he demonstrates an increasingly sincere, tolerant side to his nature. Attributable to his intensifying humility he is able to recognise his wrong doings as a leader and a father thus, the king's madness redeems him as he learns the value of true emotion and is able to consider the sufferings of those close to him. Consequently, this enables Lear to reconcile with his beloved daughter Cordelia. In conclusion, the madness of King Lear is deeply distressing, it develops from and points back to the king's instability. 1 Act I Scene iv 2 Act I Scene iv 3 Act I Scene v 4 Act I Scene iv 5 Act I Scene v 6 Gloucester's b*****d son and Edgar's b*****d brother. 7 Act II Scene iii Jennifer Kingdom - King Lear Coursework Word Count = 1946 ...read more.