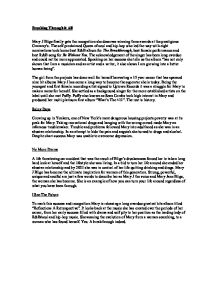 Breaking Through it All Mary J Blige finally gets the recognition she deserves winning three awards at the prestigious Grammy's. The self proclaimed Queen of soul and hip-hop who led the way with eight nominations took home best R&B album for The Breakthrough, best female performance and best R&B song for Be Without You. The acknowledgement of the singer has been long overdue and could not be more appreciated. Speaking on her success she tells us the album "has not only shown that I am a musician and an artist and a writer, it also shows I am growing into a better human being". ...read more.

Puffy also known as Sean Combs took high interest in Mary and produced her multi platinum first album "What's The 411". The rest is history. Rainy Days Growing up in Yonkers, one of New York's most dangerous housing projects poverty was at its peak for Mary. Taking recreational drugs and hanging with the wrong crowd made Mary an infamous troublemaker. Trouble and problems followed Mary into adulthood as she was in an abusive relationship. In an attempt to hide the pain and anguish she turned to drugs and alcohol. Despite chart success Mary was unable to overcome depression. ...read more.

Strong, powerful, unique and soulful are just a few words to describe her as Mary J the voice and Mary Jane Blige, the woman she has become. She is an example of how you can turn your life around regardless of what you have been through. I See The Future To mark this success and recognition Mary is releasing a long overdue greatest hits album titled "Reflections A Retrospective". It looks back at the music she has created over the periods of her career, from her early success filled with drama and self pity to her position as the leading lady of R&B/soul and hip-hop music. Showcasing the evolution of Mary from a woman searching, to a woman who has found herself. Yes. A breakthrough indeed. ...read more.