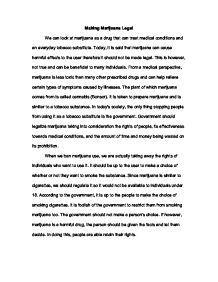 Making Marijuana Legal. When we ban marijuana use, we are actually taking away the rights of individuals who want to use it. It should be up to the user to make a choice of whether or not they want to smoke the substance.

Making Marijuana Legal We can look at marijuana as a drug that can treat medical conditions and an everyday tobacco substitute. Today, it is said that marijuana can cause harmful effects to the user therefore it should not be made legal. This is however, not true and can be beneficial to many individuals. From a medical perspective, marijuana is less toxic than many other prescribed drugs and can help relieve certain types of symptoms caused by illnesses. The plant of which marijuana comes from is called cannabis (Bonsor). It is taken to prepare marijuana and is similar to a tobacco substance. In today's society, the only thing stopping people from using it as a tobacco substitute is the government. Government should legalize marijuana taking into consideration the rights of people, its effectiveness towards medical conditions, and the amount of time and money being wasted on its prohibition. When we ban marijuana use, we are actually taking away the rights of individuals who want to use it. ...read more.

This person has been diagnosed with cancer and is suffering from some of its symptoms including pain, nausea, and vomiting, which can be helped by the prescription of marijuana. A doctor is not permitted to do this so instead has prescribed him medication that is of somewhat help but is toxic. The patient have no other choice than to get their hands on marijuana and smoke it to relieve themselves, forgetting the fact that they can go to prison if caught. Sure some individuals misuse it and smoke it for fun, but there is no reason to deny its use to the ones who need it. The government spends unnecessary money on the prohibition of marijuana. Nowadays, people using the drug are breaking the law and are being sent to prison and prosecuted. Where is the government getting all the money for this law enforcement? They are taking it from taxpayers who are forced to pay billions of dollars prosecuting individuals that break the prohibition law. ...read more.

The drug has its benefits to those who need it and does not cause harm to its users unlike many other drugs. It is actually found to be a safe and effective medicine for treating symptoms that are caused by certain illnesses. A large amount of money is being wasted on the prohibition of marijuana when there is much more important issues that call for this funding. We need to make marijuana legal and regulate it just like alcohol and tobacco. By selling it to those who want to take it as a tobacco substitute or for medical reasons, we can collect tax revenues. We can then use the money we would save from the reduction of marijuana enforcement laws and tax revenues to fund other activities that our country needs. The illegality of marijuana is drawing more attention to itself than other economic issues such as education, employment, health care, etc. Marijuana does not cause death but helps individuals in some ways while cigarettes have been proven to kill hundreds and thousands of people each year. ...read more.