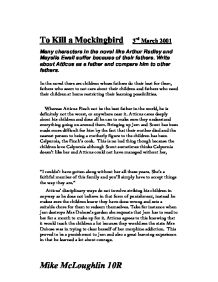 Many characters in the novel like Arthur Radley and Mayella Ewell suffer because of their fathers. Write about Atticus as a father and compare him to other fathers.

To Kill a Mockingbird 3rd March 2001 Many characters in the novel like Arthur Radley and Mayella Ewell suffer because of their fathers. Write about Atticus as a father and compare him to other fathers. In the novel there are children whose fathers do their best for them, fathers who seem to not care about their children and fathers who need their children at home restricting their learning possibilities. Whereas Atticus Finch not be the best father in the world, he is definitely not the worst, or anywhere near it. Atticus cares deeply about his children and does all he can to make sure they understand everything going on around them. Bringing up Jem and Scout has been made more difficult for him by the fact that their mother died and the nearest person to being a motherly figure to the children has been Calpurnia, the Finch's cook. This is no bad thing though because the children love Calpurnia although Scout sometimes thinks Calpurnia doesn't like her and Atticus could not have managed without her, "I couldn't have gotten along without her all these years. ...read more.

Instead of taking care of his son and finding a type of therapy to help Boo, Mr Nathan Radley simply kept his son locked away until he died. At this point, his other son, also Nathan Radley, took over the job directly and they kept Boo Radley away from the community. Atticus' discipline methods were not the only things done differently by other fathers. The way Atticus spoke and treated Jem and Scout was different from that of the way other fathers did. Atticus would talk to Jem and Scout using the same language he used at his job, as a lawyer, and if they didn't understand something he explained it to them. Atticus never simplified anything he said, he treated his children as equals and showed them respect. By doing so, they showed him and others that same respect. Bob Ewell did not appear to be much of a father when it came to any part of bringing up children, let alone his speech. Even in public he used slang and said inappropriate things in front of people. When asked whether he was the father of Mayella he said, "Well, if I ain't I can't do nothing about it now, her ma's dead." ...read more.

The different styles of upbringing used by the fathers mentioned have produced very different results in the forms of their children. The way the parents act is a direct influence on the children, as they know no better than what they see at home. Mr Nathan Radley's upbringing of Boo has mad him a recluse to the world around him and Boo has followed suit by staying away from people and only going out at night, when everyone is asleep. Bob Ewell's children, like him, are unhygienic children who seem to have no authority and who have no problems lying to get ahead. We see the major case of this when Mayella got Tom Robinson convicted after saying the beating her father gave her was Tom, r****g her. Atticus treated his children as equals and grown-ups by showing them respect and teaching them many lessons in life. Though they had no mother, the influence of Calpurnia, and later Aunt Alexandra, along with the way the children saw how people responded to their father helped in a positive childhood in which they overcame huge obstacles to turn out better than Atticus could have hoped for. Mike McLoughlin 10R ...read more.