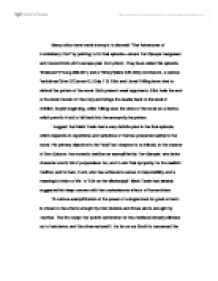 Many critics have made attempts to discredit &quot;The Adventures of Huckleberry Finn&quot; by pointing to its final episode-where Tom Sawyer reappears and masterminds Jim's escape plan from prison.

Many critics have made attempts to discredit "The Adventures of Huckleberry Finn" by pointing to its final episode-where Tom Sawyer reappears and masterminds Jim's escape plan from prison. They have called this episode "irrelevant"(Young 200-201) and a "flimsy"(Marx 426,430) contrivance, a serious "anticlimax"(Van O'Connor 6.) Only T.S. Eliot and Lionel Trilling have tried to defend the pattern of the novel. Both present weak arguments. Eliot feels the end of the book rounds off the story and brings the reader back to the level of childish, boyish beginning, while Trilling sees the close of the novel as a device, which permits Huck to fall back into the anonymity he prefers. I suggest that Mark Twain had a very definite plan in the final episode, which depends on repetitions and variations of themes presented earlier in the novel. His primary objective in the "fatal" last chapters is to ridicule, in the manner of Don Quixote, the romantic tradition as exemplified by Tom Sawyer, who lacks character and is full of purposeless fun; and to win final sympathy for the realistic tradition and its hero, Huck, who has achieved a sense of responsibility and a meaningful vision of life. In "Life on the Mississippi", Mark Twain had already suggested his deep concern with the unwholesome effects of Romanticism: "A curious exemplification of the power of a single book for good or harm is shown in the effects wrought by Don Quixote and those who's wrought by Ivanhoe. ...read more.

For every exaggerated plan Tom proposes in the final episode, Huck comes up with a practical one in such a way that the reader realizes that he is challenging Tom's previously questioned authority. This is evident when Tom plans Jim's first escape, First, Tom says: " I wish there was a moat to this cabin, If we get time, the night of escape, we'll dig one." Huck replies: "What do we want of a moat when were going to snake out from under the cabin?" They continue on in this way as Huck reports the conversation: " ' No, it wouldn't do-there ain't necessity enough for it' ' For what ' I says 'Why, to saw of Jim's leg' he says 'Good Land!' I says; 'why, there ain't not necessity for it. And what would you want to saw his leg off for, anyway?' ...'But there's one thing-he can have a rope ladder...' ...'Why, Tom Sawyer, how you talk' I says; 'Jim ain't got no use for a rope ladder"(240-241.) In this scene, Huck clearly demonstrates the childlessness and impracticability of Tom's romantic view and as a sharp contrast, the practicality of his realistic view. And though he momentarily says that Tom's head is getting "leveler," Huck openly criticizes the "authorities" (the romantic books of the past), which Tom has depended upon since Chapter II as his code of conduct: "When I start to steal a n****r or watermelon, or a Sunday-school book, I ain't no ways particular how it's done so it's done. ...read more.

IN Chapter XXXI, he decides to free Jim, yet he knows that he is wicked, a sinner in Tom's society. He says: "All right, then, I'll go to h**l..."(214.) In the last episode he no longer feels evil because he is overwhelmed by Jim's nobility. He listens eagerly as Jim explains why he stayed behind to nurse Tom when he could have escaped to freedom. "'Well, den, dis is de way it look to me, Huck. Ef it wuz him that 'uz bein' sot free, en one er de boys wuz to git shot, would he say, "Go on en save me, nemmine 'bout a doctor f'r to save dis one'? Is dat like Mars Tom Sawyer? Would he say dat? You bet he wouldn't! Well, den, is Jim gwyne to say it?'"(275-76) All that Huck can say to Jim's reasoning is: "I knowed he was white inside..." This entire episode, based on Tom's lie, cannot be considered fatal because Huck settles conflicts presented earlier in the novel. Important themes, which are repeated and varied, furnish the key. It is only in the last chapters that Huck completely rejects both Tom's romantic irresponsibility and society's cruel nature. It is only here that he understands Jim's true worth, after battling his conscience through many chapters. Finally, it is the honest and humble way in which he faces and then resolves each of the above mentioned conflicts that show Huck's developing strength of character and it is that which makes him the hero to Twain's novel, "The Adventures of Huckleberry Finn. ...read more.