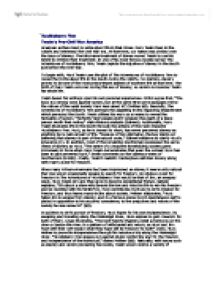 Mark Twain uses the plot of The Adventures of Huckleberry Finn to reveal the truths about life in the South during the 1800's.

Huckleberry Finn Twain's Pre-Civil War America American authors tend to write about life in their times. Mark Twain lived in the 1800's and witnessed the Civil War era. At that time, our nation was divided over the issue of slavery. The inhumane treatment of slaves moved Twain to use his talent to criticize their treatment. In one of his most famous novels named The Adventures of Huckleberry Finn, Twain depicts the injustice of slavery in the South just before the Civil War. To begin with, Mark Twain uses the plot of The Adventures of Huckleberry Finn to reveal the truths about life in the South during the 1800's. For starters, slavery proved to be one of the most predominant aspects of southern life at that time. The birth of Mark Twain occurred during this era of slavery, so r****m surrounded Twain his whole life. Twain based his writings upon his own personal experiences. Critics agree that, "The book is a strong voice against r****m, but at the same time some passages mirror the values of the r****t society Mark was raised in" (Meltzer 89). ...read more.

An obvious quest for freedom in The Adventures of Huckleberry Finn would be that of Jim, an escaped slave. Huck meets Jim and they grow to become exceptional friends. Salwen explains, "It's about a slave who breaks the law and risks his life to win his freedom and be reunited with his family"(1). Huck contributes much aid to Jim's mission for freedom, and thus learns many truths about society. Meltzer elaborates, "Huck helps Jim to escape from slavery, and in a famous scene Huck's spontaneous self is placed in opposition to his acquired conscience, to the prejudices and values of the society he was raised in" (89). In addition to Jim's pursuit of freedom, Huck hopes for his own independence. By escaping and traveling along the Mississippi River, Huck aspires to gain Freedom for both of them. Unger illustrates, "The next twenty chapters detail adventures on the river or beside the river, in a pattern of withdrawal and return, as Huck and Jim float with their raft toward what they hope will be freedom for both" (203). ...read more.

On the other hand, many readers have felt positively towards the novel. They believe that The Adventures of Huckleberry Finn has caused society to recognize the mistakes of the past. Hall emphasizes, "Initially a clowning humorist, Twain matured into the role of the seemingly naive wise Fool whose caustic sense of humor forced his audience to recognize humanity's foolishness and society's myriad injustices" (6:452). Along with this recognition came the realization that the treatment of slaves was inhumane. "To its everlasting credit, American society in the postwar period gradually came to the conclusion...that the ancient pattern of discrimination against n*****s was morally and legally indefensible," states Lynn (6:484). Finally, not only does Twain possess a negative view of slavery, he also has a distaste for war. In conclusion, Mark Twain utilizes the plot in The Adventures of Huckleberry Finn to express the immorality of life in the South during the 1800's. He depicts the code of slavery in the South and the quest for independence of a slave and a young boy. Additionally, Twain's work produced a wide range of readers' responses. Finally,Twain's last major work Pudd'nhead Wilson also strongly spoke out against slavery. ...read more.