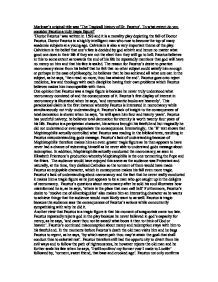 Marlowes original title was The Tragicall history of Dr. Faustus. To what extent do you consider Faustus a truly tragic figure?

Marlowe's original title was 'The Tragicall history of Dr. Faustus'. To what extent do you consider Faustus a truly tragic figure? 'Doctor Faustus' was written in 1593 and it is a morality play depicting the fall of Doctor Faustus. Doctor Faustus is a highly intelligent man who rose to become the top of many academic subjects at a young age. Calvinism is also a very important theme of the play. Calvinism is the belief that one's fate is decided by god at birth and hence no matter what good one does in their life if they are not the elect then they will go to h**l. Faustus believes in this to some extent as towards the end of his life he repeatedly mentions that god will have no mercy on him and that his fate is sealed. The reason for Faustus's desire to practice necromancy stems from his belief that he felt that no other subject could satisfy him enough or perhaps in the case of philosophy, he believes that he has achieved all what one can in the subject, as he says, 'then read no more, thou has attained the end'. Faustus goes onto reject medicine, law and theology with each discipline having their own problems which Faustus believes makes him incompatible with them. One opinion that Faustus was a tragic figure is because he never truly understood what necromancy consisted of and the consequences of it. ...read more.

Faustus repeatedly rejects god in the play because he never believed in god's capacity for mercy, as he says, 'and canst thou not be saved/ what boots it then to think of God or heaven'. Faustus's continued misconception about mercy and redemption stays with him to his fateful end. In the moments before Faustus's death the old man visits him and he begs Faustus to repent, as he says, 'by which sweet path thou may'st attain the goal-that shall conduct thee to celestial rest'. Faustus therefore still had the opportunity to divert from his evil ways and to follow the path of righteousness, he however rejects the old man and he further seals his fate when he says, 'I will confirm/ my former vow I made to Lucifer' followed by, 'torment, sweet friend, that base and crooked age'. Faustus not only confirms his allegiance to Lucifer he also commits perhaps his worst sin so far of ordering Mephistophilis to 'torment' the old man. Faustus's anagnorisis comes when he says, 'fair nature's eye, rise, rise again, and ,make/perpetual day, or let this hour be but a year, a month, a week, a natural day,/ that Faustus may repent and save his soul'. Time is moving too fast, and Faustus acknowledges that it is too late to repent. According to Aristotle, a tragic hero must have a moment of anagnorisis to be a tragic figure and Faustus does have one and hence one could argue that he is a tragic figure. ...read more.

Faustus is also guilty of demonality shown through him summoning Helen of Troy, the woman who caused a war that lasted 10 years. It is also ironic that Faustus says, 'that heaven be in these lips' about Helen as she is a devil here. Finally, Faustus is also guilty of despair, shown through him saying, 'a surfeit of deadly sin that hath damned both body and soul' . This is the worst sin that man can do as they have no opportunity to repent. In conclusion, I belief that Faustus is a tragic hero because although he committed terrible sins he is merely guilty of being human with immoral urges. Dr. Faustus is a morality play, it illustrates to the audience how one should not behave but it also illustrates the temptations that are put to them. Faustus had great ability but he unfortunately channeled his abilities in the wrong fashion. A tragic figure, according to Aristotle should be of high status so he would have further to fall, the hero should bring his own peripeteia because of his hamartia; the audience would also most likely have pathos for Faustus, sympathy because Faustus, other than his fateful flaw is actually a likeable character. The audience should also appreciate Faustus's fear because they can relate to his fall from grace and finally a tragic hero must have a moment of anagnorisis. Faustus has all these qualities in him and hence this is the reason why I believe that Faustus is a tragic hero. ...read more.