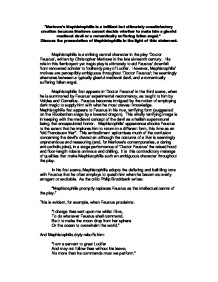 "Marlowe's Mephistophilis is a brilliant but ultimately unsatisfactory creation because Marlowe cannot decide whether to make him a gleeful medieval devil or a romantically suffering fallen angel." Discuss the presentation of Mephistophilis in the light of this statement. Mephistophilis is a striking central character in the play 'Doctor Faustus', written by Christopher Marlowe in the late sixteenth century. His role in this flamboyant yet tragic play is ultimately to aid Faustus' downfall from renowned scholar to foolhardy prey of Lucifer. However, Mephistophilis' motives are perceptibly ambiguous throughout 'Doctor Faustus'; he seemingly alternates between a typically gleeful medieval devil, and a romantically suffering fallen angel. Mephistophilis first appears in 'Doctor Faustus' in the third scene, when he is summoned by Faustus' experimental necromancy, as taught to him by Valdes and Cornelius. Faustus becomes intrigued by the notion of employing dark magic to supply him with what he most craves: knowledge. Mephistophilis first appears to Faustus in his true, terrifying form (suggested on the Elizabethan stage by a lowered dragon). This wholly terrifying image is in keeping with the medieval concept of the devil as a hellish supernatural being that encapsulated horror. Mephistophilis' appearance shocks Faustus to the extent that he implores him to return in a different form, this time as an "old Franciscan friar". This embodiment epitomises much of the confusion concerning the devil's character: although the costume of a friar is seemingly unpretentious and reassuring (and, for Marlowe's contemporaries, a daring anti-catholic joke), in a stage performance of 'Doctor Faustus' the raised hood and floor-length robe is ominous and chilling. ...read more.

tells us he: "...Did mount him up to scale Olympus' top, Where, sitting in a chariot burning bright Drawn by the strength of yoked dragons' necks, He views the clouds, the planets and the stars..." On stage, Faustus largely uses his powers for simple jokes, with Mephistophilis acting as a gleeful sidekick. Together they dress as cardinals and fool the Pope by snatching his food at a banquet, even boxing him on the ear. This highlights the wickedly jovial aspects of Mephistophilis perfectly, as he gleefully wreaks havoc on the Catholic figurehead alongside Faustus. In terms of the structure of the play, this provides entertainment for the audience (who would find anti-Catholic jokes amusing considering the anti-Catholic mood of the general public in England at the time of publication of 'Doctor Faustus') in the middle of a relatively long play that raises many serious issues. Other examples of Mephistophilis' gleeful disposition are when together with Faustus he plants horns on Benvolio, and when they trick the horse-courser by selling him a horse that dissolves into hay when it comes into contact with water. This idea of the devil as comic relief is very much in keeping with the medieval tradition. 'Doctor Faustus' is of course, in one basic sense, a morality fable, and it is a characteristic of such plays predominantly to feature characters that are personified abstractions (such as the Seven deadly Sins or the Good and Bad Angels) ...read more.

h**l hath no limits, nor is circumscrib'd In one self place, but where we are is h**l, And where h**l is, there must we ever be." This, in fact, is another inconsistency in Marlowe's presentation of Mephistophilis and the concept of h**l, for in the final scene of the play, Faustus is physically dragged, not to this metaphysical h**l, but to a vast perpetual torture-house" where there are "tossing damned souls on burning forks" and "ever-burning chairs". This striking difference is supplemented by Mephistophilis' reversion in the final scenes of the play to the simply and utterly terrifying devil Faustus first encountered in his initial necromantic experiments. This sharply contrasts with the gleeful and mischievous Mephistophilis seen throughout the middle comic scenes of 'Doctor Faustus', and adds to the ambiguity of the character. In conclusion, I feel that Mephistophilis is a wonderfully multi-dimensional character, developed in an intriguing manner that makes the devil intensely unpredictable and thrilling. The sharp contrast between his fiendishly gleeful qualities and the aspects that suggest a romantically suffering angel fallen from grace, in my opinion, make the character much more absorbing. Perhaps Marlowe realised that the most captivating characters could never remain one-dimensional. Although many critics are unhappy with the apparent inconsistencies, I think it is the combination of the gleeful and tormented aspects of the character that make him the central masterpiece of 'Doctor Faustus'. ...read more.