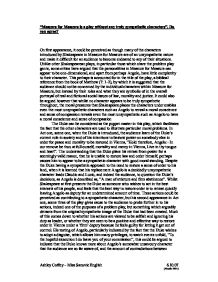 &quot;Measure for Measure is a play without any truly sympathetic characters&quot;. To what extent do you agree with this view?

"Measure for Measure is a play without any truly sympathetic characters". Do you agree? On first appearance, it could be perceived as though many of the characters introduced by Shakespeare in Measure for Measure are of an unsympathetic nature and make it difficult for an audience to become endeared to any of their situations. Unlike other Shakespearean plays, in particular those which share the problem play genre, some critics have argued that the personalities in Measure for Measure can appear to be one-dimensional, and apart from perhaps Angelo, have little complexity to their character. This perhaps is accounted for in the title of the play, a biblical reference from the book of Matthew (7: 1-2), by which it is suggested that the audience should not be concerned by the individual characters within Measure for Measure, but instead by their roles and what they are symbolic of in the overall portrayal of real and fictional social issues of law, morality and justice. It could also be argued however that whilst no character appears to be truly sympathetic throughout, the moral pressures that Shakespeare places the characters under enables even the most unsympathetic characters such as Angelo to reveal a moral conscience and sense of compassion reveals even the most unsympathetic such as Angelo to have a moral conscience and sense of compassion The Duke can be considered as the puppet master in this play, which facilitates the fact that the other characters are used to illustrate particular moral problems. ...read more.

and it can be said that as general social attitudes towards sex and religion have become increasingly liberal, the amount of sympathy felt towards Isabella, upon her introduction at least, has decreased. On the other hand, Shakespeare also puts Isabella in a situation to which her response makes her appear a much more sympathetic character. Upon hearing about Claudio's arrest, Isabella is coerced by Lucio in to trying to help, despite her protests that she is powerless to change Angelo's orders, "Alas, what poor ability's in me to do him good". Lucio persuades Isabella to act feminine and flirty towards Angelo, "Go to Lord Angelo, and let him learn to know, when maiden's sue, men give like Gods, but when they weep and kneel all their petitions are as freely theirs", despite the fact that Isabella's devout beliefs would usually prohibit her from speaking to a man unless in the presence of a senior nun. The fact that Isabella responds, "I'll see what I can do", endears her to an audience irrespective of context, as she agrees to behave in a way so contradictory to her religious beliefs in order to try and help her brother, a loyal and fairly brave thing to agree to doing when she has no confidence in succeeding at all. At this point in the play, it would appear as though Isabella, although a character with morals that are less popular today, appears to be a truly sympathetic character. ...read more.

by Angelo seems unnecessarily harsh, "See that Claudio be executed by nine tomorrow morning", and an unjust punishment for the 'crime' he is seen to have committed, but equally may have portrayed him as an unsympathetic but strong leader to an audience of the time. Despite the initial unsympathetic perception of Lord Angelo, he further on in the play becomes led more by his instincts and sexual desires as opposed to the measures rationality we are familiar with, a point which to some makes him more sympathetic because he appears to be controlled by human emotions and desires like many of the citizens of Vienna, whereas it can be more strongly argued that the hypocrisy of his decisions secures his position as a truly unsympathetic character within the play. Other characters within Measure for Measure can also be discussed in terms of how sympathetic they are, as despite not being particularly dramatic characters, their roles are important within the play as a whole. Lucio, for example, on one hand attracts sympathy because he appears to genuinely be supportive of his friend Claudio's plight. Despite appearing to take this seriously, his approach to Isabella, typical of his language throughout the play, exudes some of the vulgarities which the authorities in Vienna are keen to get rid of and negate some of the sympathy that may be directed towards him, as he appears rude and mocking of Isabella. ...read more.