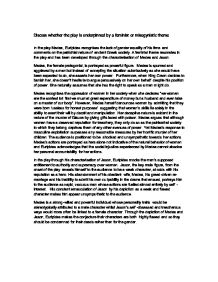 &quot;Medea&quot; by Euripides. Discuss whether the play is underpinned by a feminist or misogynistic theme

Discuss whether the play is underpinned by a feminist or misogynistic theme In the play Medea, Euripides recognises the lack of gender equality of his time and comments on the patrichial nature of ancient Greek society. A feminist theme resonates in the play and has been developed through the characterisation of Medea and Jason. Medea, the female protagonist, is portrayed as powerful figure. Medea is spurned and aggrieved by a man but instead of accepting the situation submissively as she would have been expected to do, she asserts her own power. Furthermore, when King Creon decides to banish her, she doesn't hesitate to argue persuasively on her own behalf despite his position of power. ...read more.

However, Medea herself denounces women by admitting that they were born 'useless for honest purposes' suggesting that woman's skills lie solely in the ability to exert their will by deceit and manipulation. Her deceptive nature is evident in the nature of the murder of Glauce by giving gifts laced with poison. Medea argues that although women have a deserved reputation for treachery, they only do so as the patriarchal society to which they belong deprives them of any other avenues of power. Yet Medea's response to masculine exploitation surpasses any reasonable measures by her horrific murder of her children. ...read more.

His abandonment of his obedient wife, Medea, his greed-driven re-marriage and his inability to admit his own culpability in the drama that ensued, portrays him to the audience as vapid, vacuous man whose actions are fuelled almost entirely by self-interest. His constant emasculation of Jason by his depiction as a weak and flawed character makes him appear unsympathetic to the audience. Medea is a strong-willed and powerful individual whose personality traits would be stereotypically attributed to a male character whilst Jason's self-obsessed and treacherous ways would more often be linked to a female character. Through the depiction of Medea and Jason, Euripides makes the conjecture their characters are both highly flawed and so they should be condemned for their deeds rather than for the gender. ...read more.