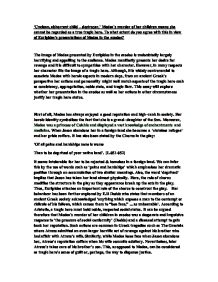 Medea's murder of her children means that she cannot be regarded as a tragic hero.To what extent do you agree that Europidies's presentation of Medea in the exodos agrees with this view.

'Unclean, abhorrent child - destroyer.' Medea's murder of her children means she cannot be regarded as a true tragic hero. To what extent do you agree with this in view of Euripides's presentations of Medea in the exodos? The image of Medea presented by Euripides in the exodos is undoubtedly largely horrifying and appalling to the audience. Medea manifestly presents her desire for revenge and it is difficult to sympathise with her character. However, in many respects her character fits the image of a tragic hero. Although, it is widely controversial to associate Medea with heroic aspects in modern days, from an ancient Greek's perspective her actions and personality might well match aspects of the tragic hero such as consistency, appropriation, noble state, and tragic flaw. This essay will explore whether her presentation in the exodos as well as her actions in other circumstances justify her tragic hero status. First of all, Medea has always enjoyed a good reputation and high-rank in society. Her heroic identity symbolises the fact that she is a grand- daughter of the Sun. Moreover, Medea was a princess of Colchis and displayed a vast knowledge of enchantments and medicine. When Jason abandons her in a foreign land she becomes a 'stateless refugee' and her pride suffers. It has also been stated by the Chorus in the play: 'Of all pains and hardships none is worse Than to be deprived of your native land'. ...read more.

Here, the gods seem to appear strangely sympathetic in her murderous sufferings and surprisingly shocking in supporting Medea's actions and punishing Jason. It can be argued that the gods support Medea and Deus ex Machina occurs in order to dispense justice by not allowing Jason to bury his children and leaving him unsatisfied. Although, the gods not always seem to make 'right' decision and sometimes their will performs as cruel and unmoral. It isn't just the fact that Medea kills her children that seem to be questioning Medea's heroic aspects. It is also true that Medea does not die. The play is in fact the only surviving Greek tragedy where the tragic hero doesn't die. Furthermore, Medea is a woman driven by 'male desire'. Her desire for revenge leads to her overcoming the sense of maternal instinct. Therefore, the Greek audience couldn't completely regard Medea as a tragic hero and 'yet the audience (...) shudder at the ruthless of her anger and passion for vengeance' (Easterling). It is unclear whether Medea aims to portray herself as a woman or to employ the "heroic 'male' weapon". She often sympathise with females as a group 'We were born women - useless for honest purposes, But in all kinds of evil skilled practitioners' [l.406-407] Here, Medea uses first person plural verb in order to become a representative of females. ...read more.

In the line 1077 she says: 'I understand The horror of what I am going to do' Evidently, Medea appears to be aware of her tragic flaw and to accept the consequences. In this case, Medea cannot be regarded as a tragic hero because she acknowledges her flaws. Therefore, the Greek audience could not be entertained or surprised by Medea's actions. We do not pity her because she accepts her tragic flaws throughout the play. Medea's self-awareness of her immorality contradicts Anderson's belief that 'the message of tragedy is that men are better than they think they are. The message needs to be said over and over lest the race lose faith in itself entirely'. There is a large distinction between the recognition of a tragic hero in Ancient Greece and the modern world. We associate heroic aspects with goodness, appropriation and a well-developed sense of forgiveness. The presentation of Medea in the exodos as well as her actions throughout the play, strongly contradict with the principles of Christianity and her character appears as irrelevant to modern ideas. Unfortunately, Medea from the Ancient Greek's point of view can be regarded as a tragic hero to a significant extent. The horrific act of murdering her children is insane and sickening; however, it is without doubt that it fits with the image of a tragic hero in a several respects. ...read more.