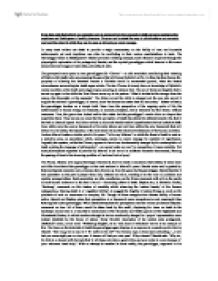 It has been said that writer's use memento mori to represent how the prospect of death serves to emphasise the emptiness and fleetingness of earthly pleasures. Compare and contrast the ways in which authors use momento mori and the extent to which they can be seen as delivering a moral message. In many texts writers use death to provide a tragic commentary on the futility of man and humanist achievements yet such depictions can often be conflicting in their various manifestations in texts. The Gravedigger Scene in Shakespeare's Hamlet provides a striking example; such a theme is explored through the playwright's exploration of his protagonist, Hamlet, and the cynical gravediggers which become in this scene almost mirrored images of each other, yet subtly at odds. The graveyard scene opens on two gravediggers (Or 'Clowns' - an odd association considering their sobering affiliation with death) who are preparing the grave that will house Ophelia's coffin. ...read more.

Arguably the speaker, unlike the Clowns, appears to have been fundamentally changed by his contemplation of death evoking the language of philosophy ('...we cannot make our sun') in recognition of mans mortality. Yet such philosophical argument is parodied by Marvell in his use of an antithetic romantic denouement, likening the passing of time to the devouring qualities of 'am'rous birds of prey'. The Prince, Hamlet, will supply that larger framework, but will reach a conclusion that initially it seems does not differ from that of the gravedigger or the male seducer in Marvell's poem. Hamlet enters and is greeted by that most typical memento mori, a human skull, thrown up from the grave by the gravedigger. Hamlet handles it and speculates on the part it played when fully fleshed and alive, ascribing it to the roles of politician and courtier amongst others. Such association are trite, nonetheless, as the Prince comments with wit on the vanity of such human endeavour in the face of an all - consuming nature of death. ...read more.

With no attempt to sanatise its brute reality, the gravedigger, engrossed in his occupation, confronts that facticity of death. But in doing so he dispenses with all interpretations of death, completely materialising it. His comments on his trade, graves and their occupants imply no human attempt to face the all encompassing mortality. In Marvell's speaker we may hazard an uplifting message from his desire to 'at once our time devour', seizing the moments of life we have left. The use of the conditional tense at the beginning of the poem and Marvell's choice to close in the present participle indicates a lengthy procrastination of meaning surrounding the theme of death and a decisive conclusion as the speaker wrestles with the concept of mortality. No such message or conclusion, however, may be found in the gravedigger's commentary. Death for him is a literal fact, an inescapable reality beyond his comprehension and thus he has not even the slightest inclination to meditate on its significance. ...read more.