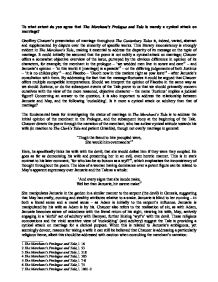 To what extent do you agree that The Merchant's Prologue and Tale is merely a cynical attack on marriage? Geoffrey Chaucer's presentation of marriage throughout The Canterbury Tales is, indeed, varied, abstract and supplemented by dispute over the sincerity of specific works. This literary inconsistency is strongly evident in The Merchant's Tale, making it essential to address the disparity of its message on the topic of marriage. It could initially be assumed that the poem is not solely a cynical attack on marriage; Chaucer offers a somewhat objective overview of the issue, purveyed by the obvious difference in opinion of its characters, for example; the merchant in the prologue - 'we wedded men live in sorwe and care'1 - and Januarie's opinion - 'in this world it [marriage] is a paradis'2 - or the differing judgements of both Justinus - 'it is no childes pley'3 - and Placebo - 'Dooth now in this matiere right as yow leste'4 - after Januarie's consultation with them. By addressing the fact that the message fluctuates it could be argued that Chaucer offers multiple compatible interpretations. Should we interpret the opinion of Placebo in the same way as we should Justinus, or do the subsequent events of the Tale prove to us that we should primarily concern ourselves with the view of the more reasoned, objective character - the name 'Justinus' implies a judicial figure? ...read more.

Indeed, Januarie outlines that he intends to take a wife for the purpose of begetting an heir and engaging in s****l activity by pious and legal means, as opposed to his previous 'bodily delit on wommen'9 as a 'wyfless man'10: 'A man may do no synne with his wyf, Ne hurte hymselven with his owene knyf; For we han leve to pleye us by the lawe'11 Januarie here (seemingly contrary to Chaucer's own views as addressed later) seems to view, in hindsight, s*x outside marriage as spiritually and legally damaging, through the metaphor of a stabbing. This statement is preceded by Chaucer's somewhat vulgar description of Januarie during his night with May, with 'thikke brustles'12 and 'the skin of houndfissh'13 - hinting roughness - as well as reference to 'his paradis'14 - suggesting that the pleasure lay solely with the male part. This is compounded by a loathsome image of: '...upright in his bed thane sitteth he, And after that he sang ful loude and cleere, And kiste his wif, and made wantown cheere'15 Which can easily be compared to a victory cry. Whether his joy arises due to a perceived redemption for his previous s****l activity as opposed to personal, appetital means is, of course, still open to debate. ...read more.

This is further supported by the fantastical, burlesque final scene, the ridiculous proposition of a s****l encounter occurring in a tree, the persistent mockery of Januarie, and the substitution of the Christian God in a garden for Pluto and Proserpina - their relationship incidentally comprising a non-consensual marriage and irregular relief, in parallel to Januarie and May. This instigates a fundamental question; is Chaucer's presentation of marriage in The Merchant's Tale meant to be addressed with any sincerity? Not only this but the fact that the Tale is narrated by Chaucer's assumption of character, the merchant, writing from an angle by which property and ownership is of sole importance, means that lines such as: 'Ne take no wyf,' quod he, 'for housbondrye, As for to spare in household hey dispence. A true servant Dooth moore dilligence'23 Must merely be seen as merchant's interpretation other than an actual purveyance of Chaucer's opinion towards the matter. Ultimately, The Merchant's Tale's message is too diluted for it to be by any means a planned, systematic attack on the concept of marriage. ___________ 21 Cambridge School Chaucer: The Merchant's Prologue and Tale, Edited by Sheila Innes, p. 107 22 Cambridge School Chaucer: The Merchant's Prologue and Tale, Edited by Sheila Innes, p. 107 23 The Merchant's Prologue and Tale, l. 84-6 ?? ?? ?? ?? ...read more.