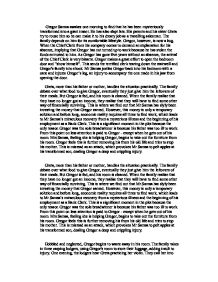 Gregor Samsa awakes one morning to find that he has been mysteriously transformed into a giant insect. He has also slept late. His parents and his sister Greta try to rouse him so he can make it to his dreary job as a travelling salesman. The family depends on him for its comfortable lifestyle. Gregor, however, is now a bug. When the Chief Clerk from his company comes to demand an explanation for his absence, implying that Gregor has not turned up to work because he has stolen the funds entrusted to him. As Gregor has gone five years without an absence, the arrival of the Chief Clerk is very bizarre. Gregor makes a great effort to open the bedroom door and "show himself". This sends the terrified clerk tearing down the stairwell and Gregor's family into shock. Mr Samsa jostles Gregor back into his bedroom with a cane and injures Gregor's leg, an injury to accompany the one made in his jaw from opening the door. ...read more.

From this point on less attention is paid to Gregor - except when he gets out of his room. Mrs Samsa, feeling she is helping Gregor, begins to take out the furniture from his room. Gregor feels this is further removing his from his old life and tries to stop his mother. This is misread as an attack, which provokes Mr Samsa to pelt apples at his transformed son, dealing Gregor a deep and crippling injury. Greta, more than his father or mother, handles the situation practically. The family debate over what food to give Gregor, eventually they just give him the leftovers of their meals. But Gregor is fed, and his room is cleaned. When the family realise that they have no longer got an income, they realise that they will have to find some other way of financially surviving. This is where we find out that Mr Samsa has slyly been investing the money that Gregor earned. ...read more.

She obliges, and the music so moves Gregor that he creeps out into the room towards her, wanting to convey that he understands her gift and will help it to blossom. The lodgers see Gregor and immediately give notice. This is the breaking point for the family. Greta declares that they must abandon the notion that this hideous bug is their dear Gregor. All sadly agree. This is a significant moment in the plot as it is the point where Gregor's family abandon him. Gregor slinks back into his room. He dies that night. A great weight has been lifted from the family. After a moment of mourning, the father tells the family to take the day off work and to go for a walk. They decide that it is time to find Greta a husband. This is a significant moment in the plot because the family's attention has now shifted to thoughts of the next person they can leach from, their future son in law. ...read more.