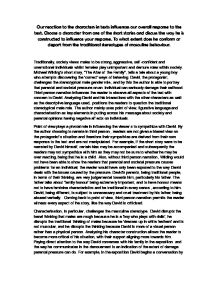 Michael Wildings short story, The Altar of the Family, tells a tale about a young boy who attempts discovering the correct ways of behaving. David, the protagonist, challenges the stereotypical male gender roley

Our reaction to the characters in texts influences our overall response to the text. Choose a character from one of the short stories and discuss the way he is constructed to influence your response. To what extent does he conform or depart from the traditional stereotypes of masculine behaviour.

Traditionally, society views males to be strong, aggressive, self-confident and unemotional individuals whilst females play unimportant and demure roles within society.Michael Wilding’s short story, “The Altar of the Family”, tells a tale about a young boy who attempts discovering the ‘correct’ ways of behaving. David, the protagonist, challenges the stereotypical male gender role, and by this the author is able to portray that parental and societal pressure on an individual can seriously damage their selfhood. Third person narration influences the reader to observe all aspects of the text with concern to David. Analysing David and his interactions with the other characters as well as the descriptive language used, positions the readers to question the traditional stereotypical male role. The author mainly uses point of view, figurative language and characterisation as key elements in putting across his message about society and parental opinions having negative affects on individuals.

Point of view plays a pivotal role in influencing the viewers to sympathize with David. By the author choosing to narrate in third person, readers are not given a biased view on the protagonist’s situation and therefore their sympathies are derived from their own response to the text and are not manipulated. For example, if the short story were to be narrated by David himself, certain bias may be accompanied and subsequently the readers may not sympathize with him as they may not be sure to whether he may be over reacting, being that he is a child. Also, without third person narration, Wilding would not have been able to show the readers that parental and societal pressure causes problems for an individual; the reader would have only been exposed to the way David deals with the issues caused by the pressure. David’s parents, being traditional people, in terms of their thinking, are very judgemental towards him, particularly his father. The father talks about ‘family honour’ being extremely important, and to have honour means not to have feminine characteristics and be traditional in every sense, according to him. David, being different, is subject to unnecessary and cruel treatment by his father; being abused verbally.  Coming back to point of view, third person narration permits the reader witness every aspect of the story, like the way David is criticised.

Characterisation, in particular, challenges the masculine stereotype. David disrupts the banal thinking that males are rough because he is a ‘boy who plays with dolls’, he disrupts the traditional thinking of males because he ‘dresses up in white feathers’ and is not muscular, and he disrupts the thinking because David is more of a visual person rather than a physical person. Analysing his character construction allows the reader to become more critical of his situation, with their support aligning more towards him. Paying direct attention to the way David converses with his family in the exposition and the way he communicates in the denouement is an indication of the extent of damage parental pressure can do. For example, in the exposition David begins a conversation by saying “Were the family convicts?” because he was a critical thinker, to ‘say only nothing’ in the Denouement, after the torment the father put him though. Therefore from analysing his speech, readers are positioned to accept that pushing traditional behaviours upon David is wrong, and their sympathies lie with him. David behaves and acts in certain ways that does not conform to the father’s way of thinking; he is imaginative and visual because he plays make-believe games with his sister and comments that babies are made ‘under cabbages’  when the conversation arises between the family members. Readers are automatically invited to think that the father is unnecessarily brutal because in today’s society this kind of behaviour from young boys is acceptable and therefore become critical of the traditional ways men are represented.

To influence the readers further and make them question traditional stereotypes, Wilding uses descriptive language as a valuable tool. The readers are already aware of the parent’s unreliable and harsh expectations of David, they know that it is the parents who force him to behave in this way as they give him no opportunity to behave any other  way suited to the masculine stereotype; Figurative language just makes the reader’s positioning seem more accurate. For example, the author uses words like ridiculous, disgusted and appalled as reactions from the parents towards David’s comments and behaviour. Readers then become emotionally attached to the text as they are angry at the parents, namely the father, for being horrible to their child; and because of this fact they are opposed to traditional masculine behaviour. Furthermore, David gets called a “lily-livered poofter” for behaving the way he does and reacts to this comment in a rather interesting way, in that, he relates the remark to flowers and how beautiful they are. This childhood innocence of David makes the figurative language used, more successful in portraying its intended massage. Additionally, in the conclusion of the text the author uses such words that reinforce the sympathy felt by the readers. For example, when David plays cricket his motions are described as hollow, mechanical, still and empty suggesting that his individuality has been robbed from him. The descriptive language tool was triumphant in aligning reader support with David.

Viewers are able to acknowledge that identity and personality can be shaped by parents and society. Through the character construction of David, masculine behaviour is challenged, in both the text and by the readers as they form their own response from analysing him. Point of view detaches any unwanted bias to make the message more reliable for the readers because all aspects of the text were presented. Figurative language positioned the viewer to be even more critical of traditional views of masculinity. By the viewers forming their own responses to “The Altar of the Family” it becomes clear that society in that time period has different values than the current time period, we are more accepting.