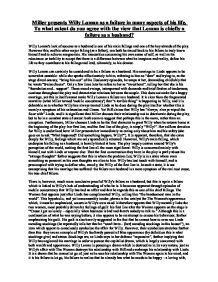 Miller presents Will Loman as a failure in many aspects of his life. To what extent do you agree with the view that w***y Loman is chiefly a failure as a husband?

Miller presents w***y Loman as a failure in many aspects of his life. To what extent do you agree with the view that Loman is chiefly a failure as a husband? w***y Loman's lack of success as a husband is one of his main failings and one of the key strands of the play. However this, and his other major failing (as a father), can both be traced back to his failure to truly know himself and to achieve anagnorisis. His insecurities concerning his own sense of self, as well as his reluctance or inability to accept that there is a difference between what he imagines and reality, define his life as they contribute to his failings and lead, ultimately, to his demise. w***y Loman can certainly be considered to be a failure as a husband. His marriage to Linda appears to be somewhat unstable: while she speaks affectionately to him, referring to him as "dear" and trying to, as the stage directions say, "bring him out" of his illusionary episodes, he snaps at her, demanding childishly that he wants "Swiss cheese". Only a few lines later he refers to her as "sweetheart", telling her that she is his "foundation and... ...read more.

This too, is the real cause of his failure as a father, particularly in regards to Biff. In this case, he projects his own feelings of insecurity, his own desire for success, on to Biff. One of his first remarks about Biff is that "he has yet to make thirty-five dollars a week!" It is clear here that w***y does not care if Biff is "finding himself" or if "all... [he] really desire[s] is to be outdoors, with... [his] shirt off": Biff is not making a success of himself in the business world, he is not earning real money, and therefore he is a "lazy b*m" and a "disgrace". However, w***y's declaration that "not finding yourself at the edge of thirty-four is a disgrace!" seems to ring false: the vehemence in this statement, emphasised by the exclamation mark, suggests that w***y is drawing attention away from the fact that he hasn't found himself either. w***y's refusal to accept reality, that Biff isn't going to be a businessman or a salesman and has no desire to be one either, is further emphasised in his mythologisation of the past. When talking to Linda, w***y describes how, when Biff came out onto the football field on "the greatest day of his life" he looked "like a young god. ...read more.

His assertion that Linda is his "foundation and... support" is painfully accurate: he appears to see her only in terms of what she can do for him. This obsession with himself and his desires, driven by his failure to understand who he is, also causes him to be a failure as a father: he cannot detach his own dreams from those of his children and cannot see them as truly separate entities. Their future, he believes, should be governed by the way in which he sees the world: this not only alienates him from Biff but leads Happy on the same disastrous course as his own life. Underpinning this is the fact that w***y Loman is unsure of his actions and destiny and that he deludes himself in order to disguise this. The construct of Ben, who is never confirmed as existing except through w***y's eyes, emphasises just how removed from reality w***y has become and how he is determined to see the world as he imagines it, not as it really is. He is, as Biff says a man who "had the wrong dreams" and it his failure to see that his dreams are wrong, his failure to fully understand why they are wrong and to therefore achieve anagnorisis, that is the chief failure of w***y Loman's life. ...read more.