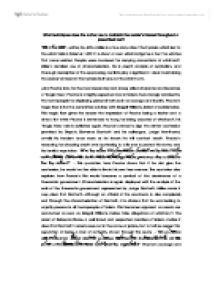 Millers writing style in The Crucible portrays a story of suspense, action, and also an array of different writing techniques to maintain the readers interest.

What techniques does the author use to maintain the reader's interest throughout a prescribed text? 'The Crucible', written by Arthur Miller is a true story about the hysteria which led to the witch trials in Salem in 1692. It is about a town which instigates a hunt for witches that never existed. People were murdered for denying accusations of witchcraft. Miller's detailed use of characterisation, his in-depth analysis of symbolism, and thorough description of the reoccurring conflicts play a significant role in maintaining the reader's interest in the hysteria built around the witch hunts. John Proctor is by far the most decorated and strong willed character and becomes a 'Tragic Hero'. Proctor is a highly respected man in Salem; he is strongly admired by the townspeople for displaying personal traits such as courage and loyalty. Proctor's tragic flaw is that he committed adultery with Abigail Williams, Salem's troublemaker. This tragic flaw gives the reader the impression of Proctor being a lecher and a cheat. ...read more.

And do you know that near to four hundred are in the jails of Marblehead to Lynn, and upon my signature?" Proctor's courage and resilience, and the evilness of Danforth, are two examples of characterisation that maintain the reader's interest. Symbolism is incorporated effectively by Miller so as to maintain the reader's interest. The most notable symbol throughout the play is the title itself, 'The Crucible'. In reality, a crucible is a steel dish used to separate pure substances from impure substances, usually for chemical reactions. Within the play, the courtroom takes on the role as a 'crucible' separating the good from the evil. The courtroom also symbolizes the corruption in the town and the people in power. This mainly applies to Danforth, who makes his intentions very clear that justice is not his priority. The cows roaming the streets of Salem are also a form of symbolism. Ezekiel Cheever, a court official says - "There be so many cows wanderin' the highroads, now their masters are in the jails, and much disagreement who they will belong to now". ...read more.

Proctor was convinced by his wife, Elizabeth, who had been told by Reverend Hale that - "...life is God's most precious gift; no principle, however glorious, may justify the taking of it". Once Elizabeth conveyed this message to her husband, he would then sign the confession. However, once it had been mentioned that it was to be seen by all of Salem, Proctor tore the document up to protect his name, his reputation and that of his family. Proctor had felt that if he were to confess to false allegations, then his life would be a symbol of the dominance of the court. He believed he was saving his soul from impurity. In conclusion, Miller's writing style in 'The Crucible' portrays a story of suspense, action, and also an array of different writing techniques to maintain the reader's interest. His use of characterisation, symbolism and conflict allows the reader to be involved through comparison and empathy, thoroughly achieving this. The reader is left with the thought that if we don't stand for something, we'll fall for anything. ...read more.