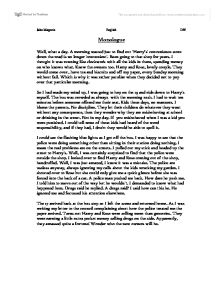 Monologue Well, what a day. A morning wasted just to find out 'Harry's' convenience store down the road is no longer 'convenient'. Been going to that shop for years. I thought it was running like clockwork with all the kids in there, spending money on who knows what. Knew the owners too. Harry and Rose, lovely couple. They would come over , have tea and biscuits and off my paper, every Sunday morning without fail. Which is why it was rather peculiar when they decided not to pop over that particular morning. ...read more.

Not in my day. If you misbehaved when I was a kid you were punished. I could tell none of these kids had heard of the word responsibility, and if they had, I doubt they would be able to spell it. I could see the flashing blue lights as I got off the bus. I was happy to see that the police were doing something other than sitting in their station doing nothing. I mean the real problems are on the streets. I pulled out my stick and headed up the street to Harry's. ...read more.

A police man pushed me back. How dare he push me. I told him to move out of the way but he wouldn't. I demanded to know what had happened here. Drugs raid he replied. A drugs raid? I said how can this be. He ignored me and focussed his attention elsewhere. The 17 arrived back at the bus stop so I left the scene and returned home. As I was writing my letter to the council complaining about how the police treated me the paper arrived. Turns out Harry and Rose were selling more than groceries. They were earning a little extra pocket money selling drugs on the side. Apparently, they amassed quite a fortune! Wonder who the new owners will be. Jake Magurie English DW ...read more.