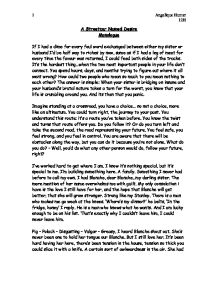 A Streetcar Named Desire Monologue If I had a dime for every foul word exchanged between either my sister or husband I'd be half way to riches by now, same as if I had a leg of meat for every time the favour was returned, I could feed both sides of the tracks. It's the hardest thing...when the two most important people in your life don't connect. You spend hours, days, and months trying to figure out where it all went wrong? How could two people who mean so much to you mean nothing to each other? The answer is simple: When your sister is bridging on insane and your husband's brutal nature takes a turn for the worst, you know that your life is crumbling around you. And its then that you panic. Imagine standing at a crossroad, you have a choice... no not a choice, more like an ultimatum. You could turn right, the journey to your past. You understand this route; it's a route you've taken before. You know the twist and turns that route offers you. Do you follow it? Or do you turn left and take the second road, the road representing your future. You feel safe, you feel strong, and you feel in control. You are aware that there will be obstacles along the way, but you can do it because you're not alone. ...read more.

She is under immense pressure as she battles to support her sister and please her husband simultaneously. Blanche and Stanley conflict with each other and therefore make things unbearable for Stella. In scene 8 Stanley and Blanche undergo an argument at the dinner party. Stanly seems to be irritated easily by Blanche, which anchors the reason for their inability to get on well together. He shows aggression as he loses all calmness and shouts 'Quiet in there!' From this we can see his short temper with Stella's sister. Although Stella tries her best to 'laugh feebly' when needed to, in order to cover up for Stanley's behavior, which is just another method of protecting and defending Stanley. She is worried to upset Blanche, and therefore pretends that everything is fine to avoid hurting her feelings. In this scene, Stella favors Blanche over Stanley. It is apparent that she see's Stanley as strong enough to hold himself. She makes remarks such as 'Mr. Kowalski is to busy making a pig of himself'. This is said to reassure Blanche that she should pay no attention to Stanley. She is simply upset by the way he has treated her. This signifies her love for her sister, and also her acknowledgement of her fragile state. This idea was explored through my monologue as I wrote that Stella has a 'longing that Blanche will grow strong, like her Stanley'. ...read more.

It was common in those times for the husband to be the head of the house hold, and the principle wage earner. It was important to be the predominant bread winner of the family. I tried to incorporate this social and historical context into the monologue to prove that the play is set, and that Blanches attempt to rebuild her life in New Orleans was doomed from the start. Stella was always going to follow Stanley's lead; he is a strong minded man which draws Stella in. I used a slight play on words, saying 'leg of meat' to connote that he is the hegemonic male within the play, who Stella surrenders to. Overall, through my monologue I attempted to explore Stella's role in the tragic downfall of her sister. The constant rivalry between Blanche and Stanley is a key feature in her life, so I aimed to make this point key also in my monologue. It is important to realize that Stella is not a weak character; she is torn between two people, and at times may seem quieter, but in fact has her own opinion on a lot of topics, which I made clearly evident in this monologue. In terms of Blanche's tragic downfall, I believe it was inevitable, and Stella through love, affection and also fear allowed Blanche to be taken away. ?? ?? ?? ?? 1 Angelique Hunter 12H ...read more.