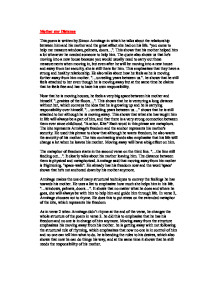 Mother any Distance by Simon Armitage

Mother any Distance This poem is written by Simon Armitage in which he talks about the relationship between him and his mother and the great affect she had on his life. "you come to help me measure windows, pelmets, doors...". This shows that his mother helped him a lot whenever he needed someone to help him. The quote also shows us that he's moving into a new house because you would usually need to carry out these measurements when moving in, but even after he will be moving into a new house and away from her security, she is still there for him. ...read more.

This shows that what she has taught him in life will always be a part of him, and that there is a very strong connection between them ever since childhood. "Anchor. Kite" Each word in this phrase are metaphors. The kite represents Armitage's freedom and the anchor represents his mother's security. He used this phrase to show that although he wants freedom, he also wants the security of his mother. The two contrasting words also emphasize that his life will change a lot when he leaves his mother. Moving away will have a big effect on him. The metaphor of freedom starts in the second verse on the third line. ...read more.

He does this to put stress on the extended metaphor of the kite, which represents his freedom. As in verse 2 when Armitage didn't rhyme at the end of the verse, he changes the whole structure of the poem in verse 3. he did this to emphasize that he has his freedom and no one is in charge of him anymore. Moving away from the structure emphasizes his moving away from his mother. he is getting away with not following the structural rule of rhyming, which emphasizes that now no one is in control of him and no one can tell him what to do. he is bending the rules to his desires, which also shows that now he can do things his way, and at the same time it shows that he still needs the responsibility of his mother. ...read more.