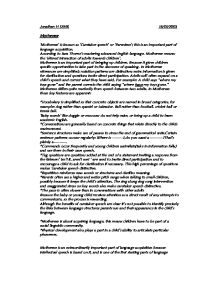 Jonathan H 12MK 15/01/2003 Motherese 'Motherese' is known as 'Caretaker speech' or 'Parentese'; this is an important part of language acquisition. According to Sara Thorne's mastering advanced English language. Motherese means: the 'altered interaction of adults towards children'. Motherese is an important part of bringing up children. Because it gives children specific opportunities to take part in the discourse of speaking. In Motherese utterances are simplified; notation patterns are distinctive; extra information is given for clarification and questions invite direct participation. Adults will often expand on a child's speech and correct what they have said, For example: A child says "where my toys gone" and the parent corrects the child saying "where have my toys gone." Motherese differs quite markedly from speech between two adults. In Motherese these key features are apparent: *Vocabulary is simplified so that concrete objects are named in broad categories, for example: dog rather than spaniel or Labrador. Ball rather than football, cricket ball or tennis ball. 'Baby words' like doggie or moocow do not help raise, or bring up a child to learn academic English. *Conversations are generally based on concrete things that relate directly to the childs environment. *Sentence structures make use of pauses to stress the end of grammatical units.Certain sentence patterns occour regularly: Where is ----------?,do you want a------------?That's plainly a-----------. ...read more.

The Wug Experiment shows that children do not simply imitate. The ability to form a plural of words which have never been heard before shows how children identify rules in the language around them, and apply those rules in new contexts. Chomsky's theory Noam Chomsky, the great Twentieth Century American Linguist, argues that this can only be possible if we are all born with language's already deep structures coded within our brain. This deep structure is the same for all humans. The grammars of different languages are transformations into a surface representation of the same deep structure. Note: Chomsky's theory suggests that only the grammar is innate. No modern linguists seriously suggest we are born with an innate vocabulary. Chomskyan linguists argue that the similarities of languages all over the world is evidence that they are all versions of the same fundamental structure. For example, the subject > verb > object word order is extremely common. Derek Bickerton has argued that Pidgins and Creole are even more remarkably similar in their grammars, and that they give us some insight into the structure of the Universal Grammar. Chomsky's theory of language acquisition All children go through a Critical Learning Period in the first three years of their life. During this period, the child's Language Acquisition Device or LAD is active. ...read more.

How come he went home? *Why he went home? *How come did he go home? Linguists struggle over these facts (see the Chapters by Lasnik and Larson), some of the most puzzling in the English language. But these are the constructions that infants are bombarded with and that they master in their preschool years. The chapter by Newport and Gleitman gives another reason for doubting that Motherese is a set of language lessons. Children whose mothers use Motherese more consistently don't pass through the milestones of language development any faster (Newport, et al, 1977). Furthermore, there are some communities with radically different ideas about children's proper place in society. In some societies, for example, people tacitly assume that that children aren't worth speaking to, and don't have anything to say that is worth listening to. Such children learn to speak by overhearing streams of adult-to-adult speech (Heath, 1983). In some communities in New Guinea, mothers consciously try to teach their children language, but not in the style familiar to us, of talking to them indulgently. Rather, they wait until a third party is present, and coach the child as to the proper, adultlike sentences they should use (see Schieffelin & Eisenberg, 1981). Nonetheless, those children, like all children, grow up to be fluent language speakers. It surely must help children when their parents speak slowly, clearly, and succinctly to them, but their success at learning can't be explained by any special grammar-unveiling properties of parental babytalk. ...read more.